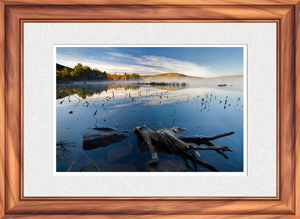 “Reflections of Nature” is November’s Print of the Month, and like October’s print, was also taken at beautiful Acadia National Park in Maine. I’ve decided this month not only to describe how the image was captured, but also how I processed the image to create the final version ready for printing. I hope this information may not only benefit other photographers, but anyone who is curious about the steps and techniques I used in creating this fine art print. This is only one photographer’s techniques and opinions, so by no means the only way to achieve these results. Please read on for “The Making Of: Reflections of Nature.”


This image was made on my second trip to Acadia this year, and my familiarity with the landscape was definitely an important factor. On my first trip I had spent alot of time around Eagle Lake, and had scouted several areas on the northern side that really attracted my eye. This particular morning, I arrived at the lake at 5:15 AM and was greeted by several photohgraphers already setting up their equipment. I was also greeted by a wonderful fog obscuring the lake’s opposite shore, and beautiful cirrus clouds so important for an interesting sky.

I headed towards the location I had in mind as the sun started to rise, and was immediately attracted by a group of trees that were in peak color for the fall. Looking for an interesting foreground, I found a large branch half submerged at the waters edge, and quickly setup my tripod, two of the three legs in the water. Once I looked through the viewfinder, I knew I had all of the elements in place that I usually look for in an image, namely an interesting foreground to anchor the image, middle ground to lead the eye, and a background to support the entire composition. Now I waited until the light was just right…

Because I was so close to the branch, I used my Canon 17-40 L wide angle lens to get the entire branch in the frame, and worked on getting just the right camera position and depth of field to make all of the elements work together. Because the branch was in shade, I made two specific exposures, one for the branch, and a second for the rest of the image being careful not to blow out the clouds and lose important highlight detail. After checking the histograms for each image, I was satisfied with the results and knew the next step would take place in the studio back home…

I used Adobe Photoshop Lightroom to process the two RAW files, making sure each one was optimized for it’s intended use. In this case, the first for the shadows, containing the branch, and the second for the highlights, containing the water, trees, and sky. These are the two original files straight from my Canon 5D: 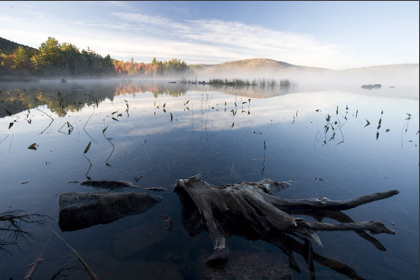 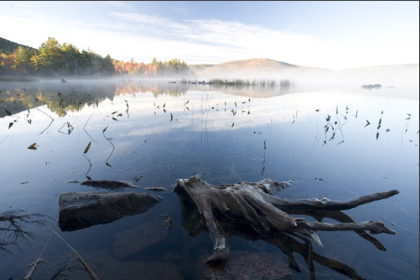 I adjusted basic tonalities, exposure, and color in Lightroom, then I exported them to Photoshop CS2 for blending and further polishing. I don’t use any sharpening in Lightroom preferring to use more precise tools in Photoshop. Files are 16-bit, in the Pro Photo color space for maximum gamut. In Photoshop, I blended the two images to create a master image that contained the best tonalities from the two exposures. I now had good detail on the branch in the water, and also good detail in the sky and other highlights. I then “spotted” the image, which is the process of removing any small dust particles from the camera sensor that show up as tiny black spots. This image had about 3-4, so it was no big deal. 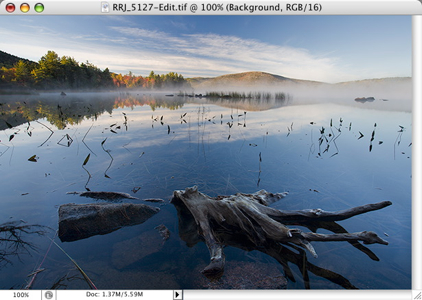 
The next step was to apply local contrast to areas I felt needed more emphasis such as the trees and mountains, again trying to reproduce what I actually saw that morning in the lake’s edge. This is done with via adjustment curves and masks which basically allow you to selectively apply the effect. 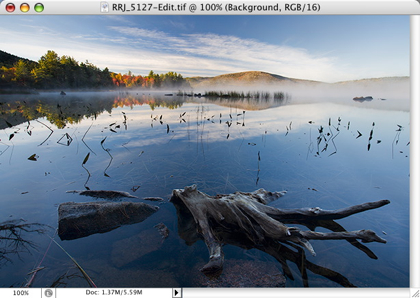 Now I did the same to the sky to bring out more cloud texture and dimension. 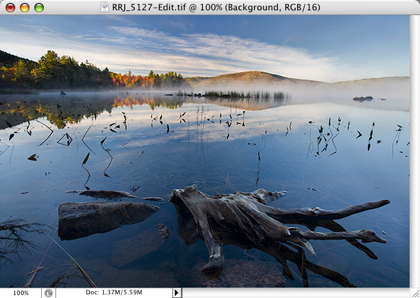 Satisfied with local contrast, I then worked on the color, first moving a slight blue color cast, then enhancing some of the foliage and mountain areas for subtle and richer saturation. 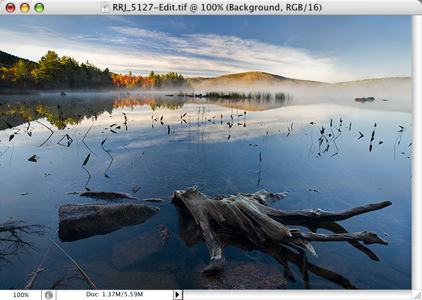 I then added some more contrast and worked on sharpening the image. I like crisp details, especially with wide angle images, but I’m very careful not to over sharpen which produces halos and just looks unrealistic. I use a great plugin called Sharpener Pro from Pixel Genius which allows me to selectively sharpen the image using a mask. This way I can lead the viewer to areas of greater detail and keep softer parts of the image like the water and sky smooth and silky. 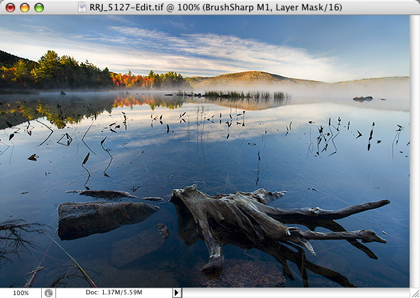 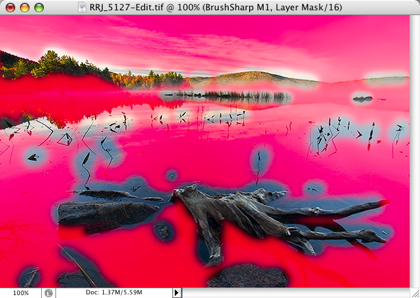 My goal was to describe my workflow and approach in simple and easy to understand steps so everyone can understand this process. I didn’t want to create a Photoshop tutorial, but rather provide a window into the process I use to bring life to what the camera sensor captures, which almost always is not what I saw at the time with my own eyes. Please feel free to email with any questions or comments. Thanks for reading!

Purchasing options available at our store.