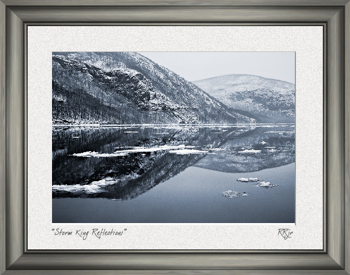 The March 2007 Print of the Month photograph is titled “Storm King Reflections”. This is an image I’ve wanted to make for quite some time, but the conditions needed to achieve what I had in my mind had not come together until last month. The Storm King section of the Hudson River is usually a very windy area due to the winds funneling through the dramatic peaks on both sides of the river. Glass-like water is very rare, and especially in the winter when many parts of the river are frozen. I also wanted fresh snow on the mountain and perhaps some fog…so after a recent snowfall, I ventured out to see if conditions were finally right.

I encountered one of the most tranquil and beautiful days I’ve ever seen on the river, and I knew I had a chance to make the image I envisioned. I took many shots, with various lenses, trying to create a unique and almost abstract composition, waiting for the numerous pieces of ice as the floated by, continuously changing the scene. Just as I had made my last exposure, a wind picked up from the North, and the reflections were gone.

I converted the image to black and white, emphasizing the graphical aspects of the lines and shapes, and added a slight blue toning to impart the cold and wintery nature of the day.

Hopefully this image conveys some of the feelings I had standing along the shore on a cold and beautiful foggy morning, with snow flurries falling on a dream like scene.

Each month, the Print of the Month is available at 20% off regular prices.