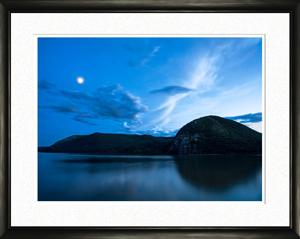 “Hudson Twilight” is an image I created on a warm summer night after a rather strenuous hike up and down Breakneck Ridge. This area of the Hudson Valley, known as the Highlands, is characterized by steep and rugged terrain rising up to form a channel of mountains on both sides of the river. Winds can be very high, and currents strong, but the views from the tops of these mountains are spectacular, sometimes reaching all the way to New York City 55 miles to the south. There is also a tremendous amount of historical significance in this region, and was considered the most important strategic location during the revolutionary war. 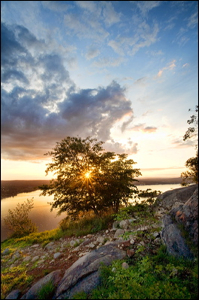 I had climbed almost to the top of Breakneck Ridge, the steepest and most exposed scenic trail in the Highlands in order to create some sunset images, and I was not disappointed. However, forgetting to bring my headlamp, I decided to head back down before it became too dark and dangerous. Arriving at the bottom of the trail, I noticed a beautiful full moon enveloped in a deep blue aura created by the soft glowing light of the sky. I made several long exposures in order to capture enough light to allow for some detail in Storm King Mountain across the river, but in doing so blurred out the moon due to motion and haze. However, I felt the quality of light and “dreamy” mood of the image was not diminished, but was probably helped by the long exposure. I struggled with this particular image for some time, trying to express a sense of how I felt gazing down at the river and enjoying the warm summer breeze and calming effect of the water illuminated by the moon. The final image here is the closest I’ve come, and I hope it provides you with a sense of the rugged but serene quality of this region.