I have been commissioned by Scenic Hudson to produce a series of 360Â° panoramas of the major parks they own in the Hudson Valley. Their goal is to use them to promote these parks as recreational destinations, and hopefully get more people to support them in their future projects. I’m very excited about this project for several reasons, mainly because I wouldn’t be able to hike and photograph in many places were it not for Scenic Hudson. Another is that the specific locations are very familiar to me, and close to where I live, especially Mt Beacon, which is literally a short walk from my home. They are interested in six of their main parks to start, with perhaps more in the future.

Interestingly, they had already contacted another company that specializes in virtual panoramas, but felt they would get better results with a photographer who was local, and had more than just a passing familiarity with the parks. When they first described the project to me on the phone, I immediately knew where I could setup my tripod at the various locations in order to have the greatest potential of achieving successful results. This is not because I have some special ability or talent, but simply because I have spent so much time at these places doing exactly what they were asking – looking photographically for great views and vistas. I am certainly honored to be participating on this project, and hope I can contribute in some small way to preserving some of the natural beauty in the Hudson Valley.

This project will probably run through the summer months, in order to capture the seasons and their different colors and moods. I will debut the panoramas here as they are created – stay tuned! 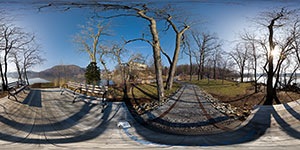