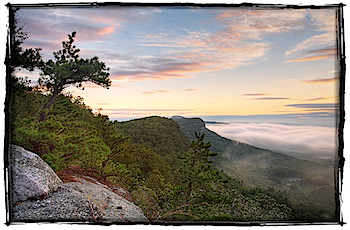 The Print of the Month for August is “Millbrook Mtn Sunrise”, from one of my favorite places, the Mohonk Preserve in New York.

This is an older image I made over two years ago, but for some reason I had never paid it much attention until now. On a recent visit to the same trail, the light just was not very favorable, but I enjoyed the hike and wild blueberries just the same. The scenery there has always inspired me, so when I got back home and reviewed the days images, I decided to look back through my archives and remembered a previous visit when the light had been very nice indeed. Reviewing the images later that evening, I selected a few to develop that I felt had potential, but this was not one of them. I didn’t have the trusted gut reaction that I have to images I feel are successful, and filed it away for future reference. This is a completely personal and subjective process, but in my opinion so important for an artist.

Looking at it two years later however, combined with having hiked there several times over the last few months, gave me a new perspective and better understanding of what I want to convey about this place. And that is the ultimate goal for me, to bring across to the viewer a sense of what it feels like to be there. This is not just standing at a particular spot waiting for beautiful light. Often I arrive before dawn when it is dark, and have to find my way with the help of a head lamp. With shadows all around, and just the faint glow of blue light on the eastern horizon, my anticipation grows for the eventual appearance of the sun and its warm, energizing rays of light. 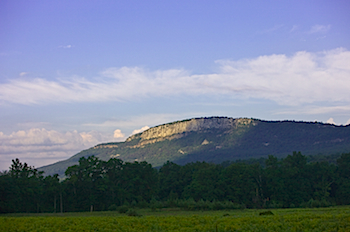 Millbrook Mountain from a distance

Once I’ve climbed up several hundred feet to get up on the edge of the ridge, the famous “Shawangunk Ridge”, I’m sweating and breathing hard, but the light is now turning towards deep red and I’ve forgotten the time and effort it took to get there, starting with the dreaded alarm clock at 3:30AM. Now the real work begins with my camera, searching for a composition that will translate both the scene before me and how I feel about it together in a flat 2-dimensional print. I get so focused that time and place disappear, and I just concentrate on responding to what is happening at that moment, regardless of what I think about it.

I often refer to this process afterwards as a recipe for frustration as I rarely succeed at what I see in my mind. But it is the process and experience I so enjoy that keeps me trying over and over again. As Eckhart Tolle so well says in his book A New Earth, “…not what you do, but how you do what you do determines whether you are fulfilling your destiny.” The outcome becomes secondary, and I focus on the moment, reacting visually to the environment. Many of my better images have come from this process, and I didn’t realize I had captured something worthwhile until much later. 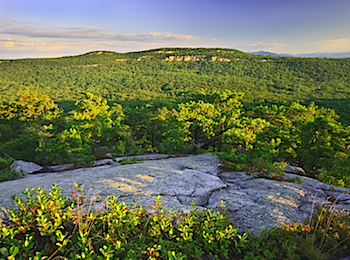 The trail up onto the “Ridge”

Whether this is the case with “Millbrook Mtn Sunrise” I’m not sure, but for me it conveys what it felt like to be there that morning two years ago. Each viewer responds to images differently however, and so it may not have the same connotation for someone else. That’s not so important for me, what is important is that there is some reaction, similar to the reaction I had when I press the shutter,