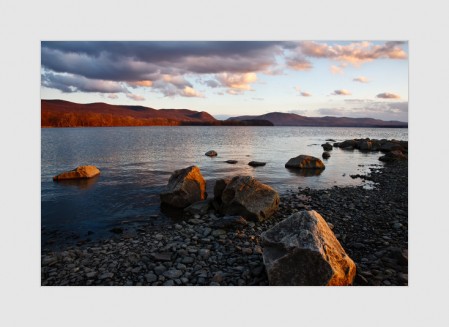 Of all the images I make on a regular basis, only a few actually become a part of my “portfolio”, which are the photographs I feel best represent my work as a landscape photographer. These are the only images I make available for purchase on the webstore, as well as at galleries and art shows. While I’m often tempted to add more images that I like, this is not enough – it has to really feel like the image is my best effort. This is something I just know intuitively,  that I made the right decisions in the field and captured something special. It is rare, and frustrating, and difficult to understand at times, but it’s the only way I know how to work creatively, whether producing music or visualizing an expressive image.

“Magic Moment, Hudson River“ is one of those images that combines all of the elements I constantly seek in the landscape. When they all come together, it’s like a puzzle that all of a sudden reveals something greater than the individual pieces. I was tempted to call this photograph “Winters Warmth II”, since it reminded me of a similar image I have in terms of its mood and character, but Magic Moment really captures what it was like to be there at the rivers edge in a cold, early spring, headwind. The light was amazing, and became the single focal point I based the whole image around, much like an arrangement supports a melody. Once I found the angle that best revealed how the light was dancing off of the rocks in the foreground, it was then a matter of aligning all of the elements in the middle and background to complement the whole scene. I looked for repeating patterns in the sky to balance the rocks, and looked to the distant mountains to provide a resting place for the light. Rhythm was again part of the compostion, as the light travels through the image from the rocks to the clouds (notice the very faint rays of light flowing vertically through the water).

I’ve photographed this same scene and location many times as those familiar with my work will recognize. What can I say – I love taking the same scene and finding an infinite number of ways to interpret it – proof that there are only wonderful creative possibilities to be found in familiar places.

What made it even more special was my son Bryce was again by my side with his own camera, asking if the light was just right for him to “take” a picture. I make a living at this, and I’m always thinking about the econimic realities we all face today, but there is something powerful about a magic moment in nature that reveals what is really important in our lives.