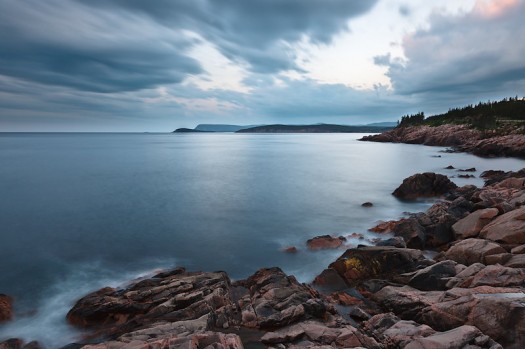 I visited this location four times during my trip to Cape Breton Highlands National Park, three times during sunrise, and once during sunset to shoot some video. The first two times were unsuccessful since there was never a sunrise, but I decided to try once again on the day I was leaving – I’m glad I did. The weather was very active to say the least, with fast moving cloud formations, wind, and extremely variable light – the perfect opportunity to play with long exposure once again. I made many images, but here are two that are similar, so I decided to see what a black and white conversion would feel like. 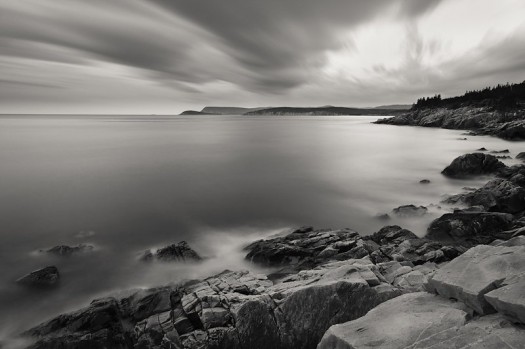 Removing the color creates a totally different mood, and I really like how the tonalities create areas of interest and lead the eye from foreground to the sky in a circular fashion. Again it all depends on what you want to convey with an image, so in time I will have to decide which of the two really captures my feelings about the scene.

Both of these were processed in Lightroom 3 only, with little or no noise reduction since I used ISO 100 for both. I added a slight warming tone to the highlights of the black and white, and some minor dodging to the waves in the foreground. On both of these images I used a Singh-Ray 0.3 soft graduated ND filter to bring down the highlights in the clouds, adding drama and intensity to the scene (the way I felt while shooting). Lately I have been using these filters more and more to cut down post processing time and capture an image that is closer to a final version.

“People say that what we’re all seeking is a meaning for life. I don’t think…

Marsh Lines, Acadia National Park "Creativity is imagination and imagination is for everyone." Paul Arden…