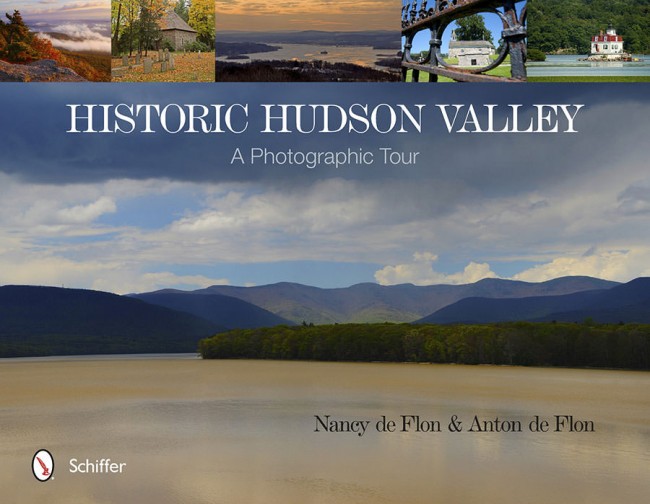 [symple_box color=”gray” text_align=”left” width=”100%” float=”none”]Publishing a photography book is one of the more satisfying ways to share your work and tell a story. Friend and student Nancy de Flon, together with her son Anton de Flon did just that recently, with the release of their new book Historic Hudson Valley: A Photographic Tour. I love sharing information that I think might help you in your photography path, and so I asked Nancy if she would share the process of making this book with a guest post. She not only agreed, but sent me a hard copy to review and enjoy – thanks Nancy. So with that said…[/symple_box]

The Making of Historic Hudson Valley

I want to begin by thanking Robert for his invitation to contribute a guest post to his blog. Robert is a gracious and generous mentor to anyone interested in expanding their horizons in photography—as well as, of course, being the most gifted image-maker the Hudson Valley has to offer.

Robert asked me to write about the genesis of the book, Historic Hudson Valley: A Photographic Tour (Schiffer Books, 2013), that I coauthored and photographed with my son, Anton, who actually taught me a lot about photography, beginning with the day he handed me a Nikon D6006 and a Nikkor zoom lens during a trip to Arctic Sweden in 1994. A well-known Swedish photographer we met there advised Anton to find his own niche place that he could return to on a regular basis and mine for photos in all different seasons and lighting conditions. Since mountains were definitely Anton’s “thing,” and since we then lived on Long Island, where the highest altitude must be some sand dune on the South Shore, the Catskills were a natural, and he spent many a weekend studying maps and exploring Ulster and Greene Counties and surrounding areas.

In 2010 we decided it was time to approach a publisher with a proposal for a book that would celebrate the nature and history of this stunning region of the Northeast. We each already had good portfolios as bases on which to build and were in locations that would facilitate travel to “fill in the gaps.” An experienced publishing professional, I researched the possibilities and pitched our proposal to Schiffer Publishing in Pennsylvania. After a couple of phone conversations, Pete Schiffer accepted our proposal and gave us a contract. (For any readers out there considering a publisher for their photo book, I must say the Schiffer team is wonderful to work with.) The idea governing the book was to provide not only an extensive collection of photographs, but also brief historical and practical information about the sites (including general directions on how to reach them). A list of web addresses in the back directs readers to more detailed information about the sites—for example, opening times, admissions fees (where applicable)—so that readers can access the most up-to-date information. This wasn’t going to be the sort of guidebook that’s out of date as soon as it goes into print because that sort of information is always changing.

What areas would we cover? Anton, the trained geographer, pointed out that the Hudson River begins at Lake Tear of the Clouds on the southwest slope of Mt. Marcy in the Adirondacks and flows down to New York Harbor. Since he had several photos of the Hudson in the Adirondacks and from Manhattan, and I had the image of Jeffery’s Hook Lighthouse with the GWB, we had, geographically, a complete range of images spanning the length of the “lordly Hudson.” But it’s important to emphasize that we didn’t strive for “completeness” in any other sense; as we say in the Introduction, “This is a highly personal interpretation of history in that it offers images of what has moved each of us; it makes no pretenses to a systematic completeness.” Having said that, there are (IMHO) a couple of gaps I would like to remedy if the book were to go into a second edition, notably to get better coverage of beautiful Columbia County.

Having worked with an assortment of Nikon SLRs since the mid 1990s, we each went digital around 2005–2006 with the Nikon D50 and have upgraded fairly regularly since then, though Anton, for a while, retained some medium- and large-format gear. All my photos in the book are digital—to my Nikon system was added the Canon Powershot G11 (which I’ve since upgraded to the G15), an excellent camera for street scenes and places where a DSLR-and-tripod setup would be too clunky and/or too obvious—while Anton’s photos include images from his entire range of gear (he has a very good scanner for producing digital versions of the film captures).

The fun part of this project, needless to say, was the quest for more images to ensure that we had the number we had promised to our publisher. A list was made of what we had, and obvious gaps pinpointed. Definitely far more photos were made for this project since we had the book contract than before. (Anton and I made a loose agreement not to duplicate work by shooting at the same sites. Nonetheless, this did happen in a couple of instances and it was just a matter of editing down to the most appropriate shots.) I acquired maps of each of the counties involved, as well as Hagstrom’s masterful Hudson Valley Street Atlas and such useful resources as the Hudson River Valley Natural Heritage Area Heritage Site Guidebook. Also, I simply undertook driving tours up and down both sides of the river and got to know the area quite well. Both cameras were always along, as were a variety of lenses for any eventuality. Since Anton was in the process of looking for a home to buy somewhere in the region, he, too, got to investigate places with which he might not otherwise have become acquainted. On occasion, a trip might lead to unexpected discoveries; for example, on a weekend at the Hanah Mountain Resort in Delaware County we found beautiful Margaretville, where I photographed its historic streets both before and after its devastation by Hurricane Irene (only the “before” pictures made their way into the book).

One of the real beauties of undertaking a project like this is the subject-matter “side trips” it spawns—side trips that become major projects in their own right. I became fixated on historic buildings, old buildings, even ruins, and have ended up traveling especially around Greene and Ulster Counties looking for them and learning ways to compose and post process the images so that I’m not ending up with simple documentary shots. Anton plans to expand his Adirondack collection, hopefully (in part) to accompany an article I want to write on the historical aspects of the Adirondack portion of the Hudson River.

Finally, one word of advice I would offer to any photographer thinking of offering a book proposal to a publisher: Be prepared to develop a marketing plan. Publishers are in business not to make authors feel good but to sell their books, and a publisher’s best resource for sales and marketing tips is the author. If the author (or photographer, in this case) can’t answer the question, “Who will buy your book?” and provide detailed lists of suggestions (stores, groups and clubs, gift and museum shops, radio and magazine outlets for publicity, and so forth), the publisher is not likely to take a chance on you.

The publishing process for Historic Hudson Valley has been a learning experience and a delightful project for us. Now the next fun part is meeting the people who are open to selling the book, providing opportunities for radio interviews and other talks, having gallery shows and other opportunities to show and sell. And always, there’s the feeling that we’ve contributed something of beauty and something informative as well—a keepsake of the beautiful Hudson Valley and Catskills.