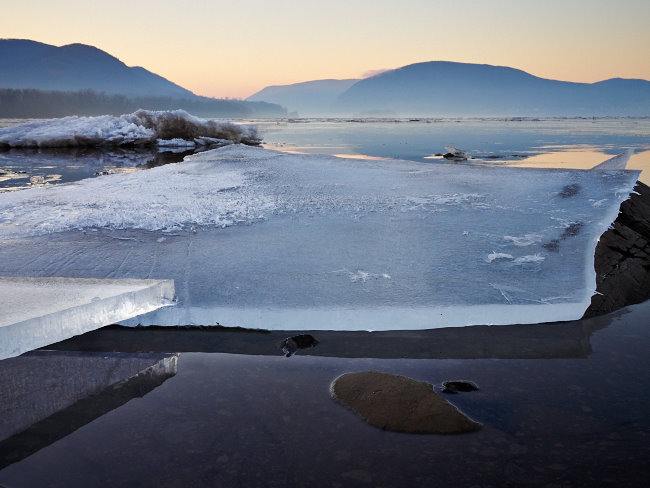 This is a favorite spot on the Hudson for me because it’s close to home, offers great opportunities, and I never know what to expect when I visit. I’ve avoided it for a few months simply because I’ve been so busy, but I ventured out yesterday to see how much ice remained on the river after the freeze last week. I also wanted to try a new camera, the Olympus OM-D E-M1 which I’ll be taking with me to France next week instead of my usual DSLR. I paired it with a Panasonic 20mm f/1.7 lens that I like quite a bit.

I’m extremely pleased with the results so far, as I’ve only had the camera body for a few days. I plan to use it with prime lenses only, and work within the limitations as compared to my Canon gear—mainly lower resolution and low light performance. But it’s hard to argue with much better size and weight, fantastic image quality, and better high ISO performance. (I’ll have more to say about the Olympus OM-D E-M1 when I return from my trip since I plan to use it extensively in many different shooting situations, but so far it’s awesome.)

In terms of making this image, the size and shape of the block of ice in the foreground caught my attention immediately. Strong and visually striking with wonderful texture, I felt it would make a very good foreground anchor to the image. So much so in fact that I used f/11 to purposely allow the photograph to go slightly soft in the distant mountains. Detail in that area of the image wasn’t that important to the composition, and in fact I think it strengthens the foreground since the eye always looks for areas of highest detail.

Everything in landscape photography is all about relationships, which is why it’s difficult to make generalizations or follow formulas. What works for one image may not work for another. The way to use this to your advantage is to constantly think about composition in its simplest form – the strongest way of seeing. I’ve repeated this Edward Weston quote countless times here and in workshops, but it continues to ring true the longer I photograph. It’s effective because it’s simple.

Of course applying it is not so simple, especially in nature. Sure there were many, many sheets of ice similar to this one on the shore. But I chose it specifically because it captured the sense of place simply and without distraction or confusion. That should be your goal each and  every time you make an image in nature. Break the scene down to its simplest forms—this usually leads to clarity about the message, meaning, or story. Remember, we’re using a visual language to communicate our ideas and feelings—no small feat.

Studying great painters and paintings is not about making your images look like paintings. It’s about understanding how to use the visual language. Learn from every source, then apply it in your own way. Sure you’ll fail, but that’s progress.

Comments or feedback is always appreciated – thanks for reading!

“People say that what we’re all seeking is a meaning for life. I don’t think…

Marsh Lines, Acadia National Park "Creativity is imagination and imagination is for everyone." Paul Arden…