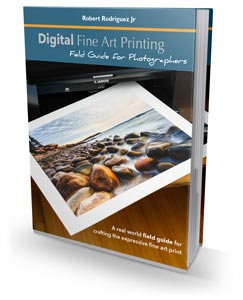 My new book “Digital Fine Art Printing – A Field Guide for Photographers”  is now available here on the website. I’ve been working on it for over 6 months now, and had planned on releasing it before the end of 2013, but delays, edits, and travel forced me to wait until now.

But I’m happy I did because I think it made for a stronger result as I revised and reread the book to make sure it was as clear, and simple to understand as possible. Digital printing is a rather complex topic, but what I’ve learned from teaching printing workshops for 5 years now, is that similar to photography, a basic understanding of the fundamentals is key. And that includes both the technical aspects as well as the aesthetic considerations that go into making prints.

Digital photographers have become really good at manipulating pixels on a screen to no end, and that’s certainly an important part of the so called “digital darkroom”. But when we’re just typing keys and clicking mouse buttons hour after hour, the connection we had to the subject, that feeling we had when we pressed the shutter becomes distant somehow. It’s as though there’s a sheet of glass between the work and ourselves.

Making a print brings a physical object into existence, one we can touch and hold. And most importantly lets us experience what it feels like to create something tangible. When someone else holds that print, the same feelings are created in them—they get to hold your creation, in their hands. That sense of accomplishment is one that is difficult to achieve on Flickr, Facebook, or on your iPad screen.

Here’s a test—show someone your masterpiece on your glorious retina iPad. Then show them an 8″x10″ print of the same photograph on a beautiful fine art paper, maybe Canson Photographique. Now notice which one holds their attention longer, which one generates the distinctive body language that says “wow, this is different, something I should really give my attention to.” Notice which one will make you feel more like you’ve made something worthwhile. Which one gives you greater satisfaction for being dedicated enough to actually make the print.

This is what I live for—not the praise of others—but the knowing that I made something original, and someone else can experience that exactly as I intended it. Now you don’t necessarily have to share that same sentiment, but at the very least printing will improve your understanding of the creative process, and I strongly believe help you become a better photographer.

The book is available here!

“…printing images is a necessity for a photographer to completely understand the image making process. And he explains that very nicely in his book, Digital Fine Art Printing. I learned a tremendous amount about printing. I even learned more about processing images and exposing to the right. I highly recommend Digital Fine Art Printing to anyone that is looking to not only learn more about printing but improve their overall photography.” ~ Ramon Nuez