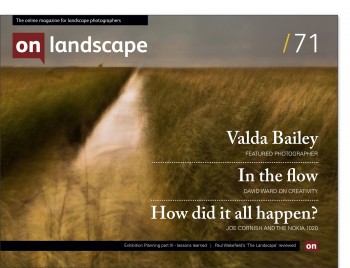 One of the few photography magazines that I read regularly, and highly recommend if you haven’t heard about it already is On Landscape, based out of the United Kingdom. It features great articles and photo essays from some of the best landscape photographers working today, including several that have been instrumental in my approach to making images.

One in particular is David Ward, who not only is a fantastic photographer but also writes eloquently and effectively about the art and craft of photography. He’s a frequent contributor to the magazine, and in a recent article he writes:

“I believe that in order to hold our viewers’ attention we need to do more than merely describe. It ’s not good enough to stand yourself in front of the most amazing view in the world (suggestions on a postcard please) in breathtakingly beautiful light. That might elicit a wow but it won’t instigate a deep and subtle dialogue with the viewer.

For the image to transcend its subject , to become more than an illustration, we need to make images that are intriguing and evocative. Only then might our images be considered art . I consider this ambition to be one of the hardest but most satisfying things to strive for in landscape photography.” – David Ward

For me the most thought provoking idea is the notion of photographers doing more than describing the landscape. And the reason is that though a camera is perfectly adept at describing a landscape in terms of the way it looks, it fails miserably at doing more than that – specifically making an evocative image. An image that is evocative brings strong feelings and memories to mind – it elicits the imagination in a way that a snapshot does not. It invites the viewer to consider the meaning of the image, the perspective of the photographer, and how they relate. That is the ultimate pursuit of the landscape photographer in my opinion.

Tomorrow I’ll share a simple exercise that might help you consider when and why to press the shutter button.  Thanks for reading! In the meantime check out On Landscape and consider subscribing – I think you’ll find it worthwhile.