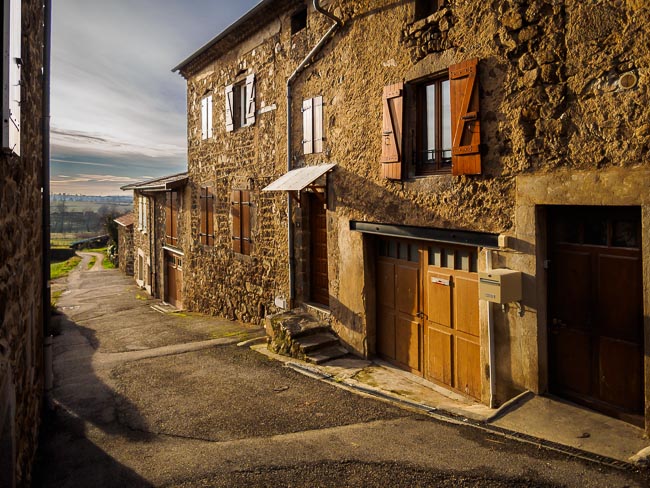 Earlier this year I spent 10 days in Annonay, France, a small city just south of Lyon, and home to the Canson  paper company. I was invited as a guest artist to their bi-yearly “Customer Days” event, where distributors from around the world come to learn about new products and attend seminars and training. As a Canson ambassador, I gave a daily presentation on how and why I use Canson Infinity paper, and shared my thoughts on the best ways to help and educate photographers about printing in general.

A short drive from the resort where the conference was held is Canson’s world headquarters and distribution center. It’s where most of Canson’s products, like notebooks, drawing pads, and fine art inkjet paper is packaged and shipped around the world. But the real highlight for me is visiting the paper mill, a totally separate building a few miles away. Canson is one of the few paper suppliers in the world to own their own mill, and that’s something that attracted me to their paper from the very beginning.

Taking pictures inside the mill is not allowed, so I was really excited when they gave me exclusive permission to bring my camera and photograph whatever I wanted, with the condition that any photos shared publicly would be cleared first. It was fun but challenging, and I just tried to react to the environment visually, looking for graphic elements, strong colors, and capture a sense of what the experience was like. It was also my first real opportunity to use the Olympus OM-D E-M1 and a set of prime lenses in an unfamiliar environment. I’m quite happy with the setup, and it’s a nice complement to my other cameras (more on the setup below.)

Canson’s paper mill is a fascinating combination of old and new technology, which you quickly become aware of as you make your way through the various stages of paper making. You see cellulose fibers being loaded onto a conveyor by hand; huge tanks of swirling pulp (what paper is made of, mostly fibers and water); large mechanical machines operated by humans; a control room with dozens of switches, dials, and computer monitors. You can see and appreciate how Canson leverages their heritage of paper making, adding the old and new to produce paper for both traditional artists and digital print makers.

Laser scanners check the paper for thickness and consistency, and every aspect of the process is controlled by computer. Yet the aesthetic quality of the paper is still methodically checked by hand, where texture, smoothness, and overall feel are evaluated by a trained technician, or sometimes by a visiting artist. It’s amazing to me that with all the technology involved, they still rely on a human hand to give the final stamp of approval.

Walking through the mill is a total sensory experience, including all sorts of sounds, vibrations, and rumblings that keep you constantly alert to potential danger. Yellow traffic lanes warn you to watch for speeding fork lifts, beeps and alarms signal some activity about to happen. From one area to the next, temperatures and humidity levels change dramatically, and I had to keep a lens cloth handy for condensation and moisture on my lens.

The huge and imposing Fourdrinier machine is where the magic happens; pulp enters one end and emerges as a two ton roll of paper on the other. Just before the pulp starts its journey, it generates a lot of mist, and taking photos was difficult since my lens would instantly get covered with water vapor. After lots of wiping and a few carefully timed shots, I started to get a little “damp” myself, so it was time to move on.

The pulp moves onto the “wire”, where the water is drained to create a continuous paper web that is gradually pressed into a super wide sheet of paper. It gets squeezed through countless rollers of varying sizes, changing direction as it goes up, down, sideways, and every angle in between. It makes for rather graphic photos, and I tried to isolate sections with a longer focal length to emphasize this. I was amazed at the sheer number of moving parts, wondering how maintenance and repairs were carried out, especially since the mill runs almost round the clock.

Eventually you reach the end of the machine where a huge roll of fine art paper about 20 feet in width and weighing two tons emerges. I was struck by how white and pristine it was, given the rather dull gray look of everything else.  Within minutes a technician rips off a large poster size sample and it’s carefully inspected for quality and consistency. From there the roll gets cut up into smaller rolls of varying sizes and is sent to the distribution plant for packaging. Paper destined to become digital inkjet paper is sent to another facility to receive the micro-porous coating that enables it to be printed on an inkjet printer.

Canson provides factory tours to guests, and the guides are great at explaining every aspect of the mills operation. You’re not allowed to wander off on your own for safety reasons, but I was encouraged to do just that. “Just don’t get lost, and stay alert” I was told.  Easier said than done. Before I knew it, I lost track of where I was, but kept wandering because the next photo opportunity was too hard to resist (sound familiar?) “I’ll find my way back to the group,” I thought, “this is too interesting to pass up!” Stacked rolls of paper 20 feet high, long conveyor belts, more fork lifts, and I don’t know how to speak French! Though it was fun, thankfully I saw a guide waving at me to hurry or I’d miss the bus back to the hotel. We both laughed at my predicament, and he seemed genuinely happy that I found the factory so interesting from a photographic standpoint.

It’s always a treat to visit the mill, and the Canson employees really seem to value the work they do. I know it makes my appreciation of paper making that much richer, and I love sharing that with students and patrons that purchase my prints—which are of course printed on the same fine art paper I saw being made at the mill.

As I mentioned before,  I used the Olympus OM-D E-M1 which I had purchased just before this trip. I added the Olympus battery grip (which I find an absolute necessity for ergonomics and extra battery life), plus a set of carefully selected prime lenses: Olympus 12mm f/2.0, Panasonic 20mm f/1.7, Olympus 45mm f/2, and the Olympus 75mm f/1.8.

The camera performed flawlessly, especially the EVF (electronic view finder) which was one of my main concerns.  The E-M1 has one of the best EVF’s I’ve ever used; clear, sharp, and fast, which is so critical when shooting handheld as I did here.  I was also impressed with the sharpness and optical performance of each of these lenses. The Oly 75mm is definitely in a class of its own, matching or exceeding my Canon 70-200 f/2.8 L lens (my favorite lens in terms of optical quality). The others performed great as well, a standout being the Oly 12mm – ultra sharp, very little distortion, and oh so fast for a wide angle – something I’m not used to in a small package.

I’ll have more to write about the E-M1 in a future post, including how it performs in a very familiar setting – the landscape. Thanks for reading and hope you enjoy the photos.