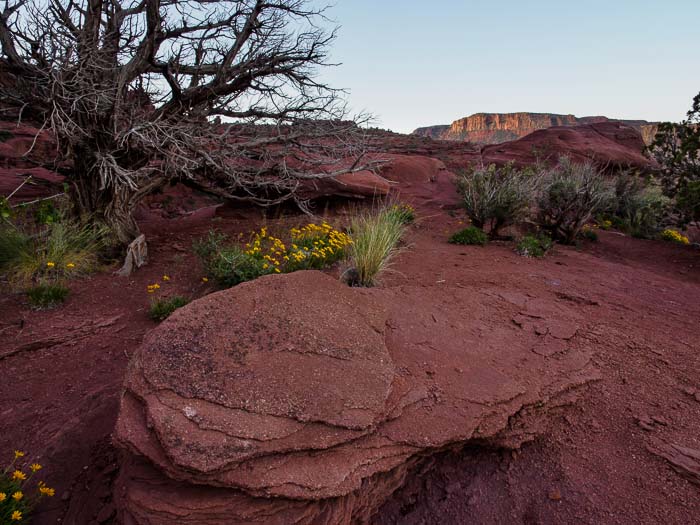 Creative composition is often a matter of being really attuned to the subtleties of the landscape. In Utah those subtleties are often difficult to see because there’s just so much going on. It’s an overflow of sensory information in every conceivable way, and vision is often superseded by the mental activity of taking it all in. It can be difficult for the photographer who wants to capture more than just a postcard. I like postcards for what they are, a nice rendition of a vista. But it leaves little to the imagination beyond what it shows the viewer, a nice landscape and nothing more.

For an image to convey more, it needs to be personal, introspective perhaps, and certainly attuned to the subtleties I mentioned above. For me that means getting really focused about exactly what I see and feel, and letting the rest fall away, without worrying about “missing a shot.” One approach is to make less images, and spend more time following a specific idea or subject that leads to clearer seeing. 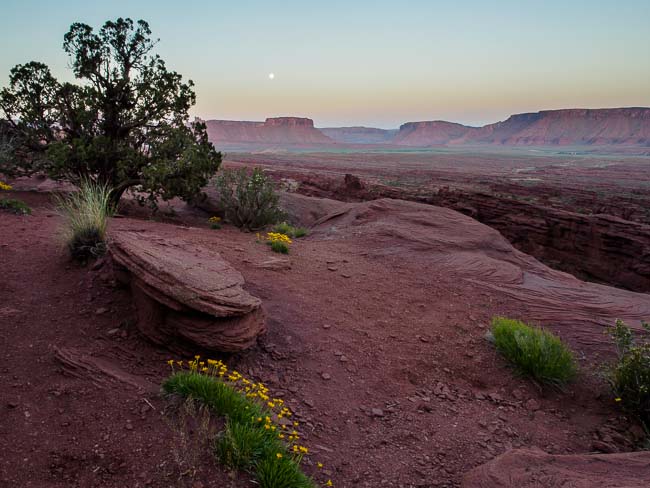 The image above is a good example of where following an instinct can lead to a better composition, and ultimately one that conveys a perspective. Note how the image captures great light and ambiance, but nontheless is rather busy and ambiguous at the same time. What is it really about? The moon, the flowers, the mesa in the distance, or the large foreground rock? I knew what it was about, but that’s not effectively conveyed in the image – it fails in that respect, an all too familiar occurrence for me. It may have good leading lines and overall balance, but it lacks a strong perspective. In short, it lacks a purposeful and simple composition that has the potential to convey something of what the photographer felt.

The final image is a result of following an idea or developing the “main character” as I like to tell students. That character was the large rock, which now dominates the scene and allows the other parts of the image to breath without coming into conflict. When we talk about harmony in composition, that’s the goal – to let all of the different visual elements work together. When that happens, the whole becomes greater than the sum of the parts, an idea that comes from the Gestalt psychology.

I made the image with the Olympus E-M1 on a tripod and the Olympus 12mm f/2.0 lens (becomes 24mm with the camera.) I focused on the backside of the rock at f/8 and checked the cliffs in the distance afterwards on the LCD screen to make sure I had enough depth of field.

Get close, get intimate, show the viewer what you see and feel. Think of a conversation between two people shouting across a room versus sitting at a small table in an intimate setting. If you want to share your version of the lansdscape, find a way to show your perspective, not the postcard image which just shouts at your viewers.

Agree, disagree? Let me know in the comments below. I’ll also be sharing some more behind the scenes photos from our workshop which starts tomorrow!