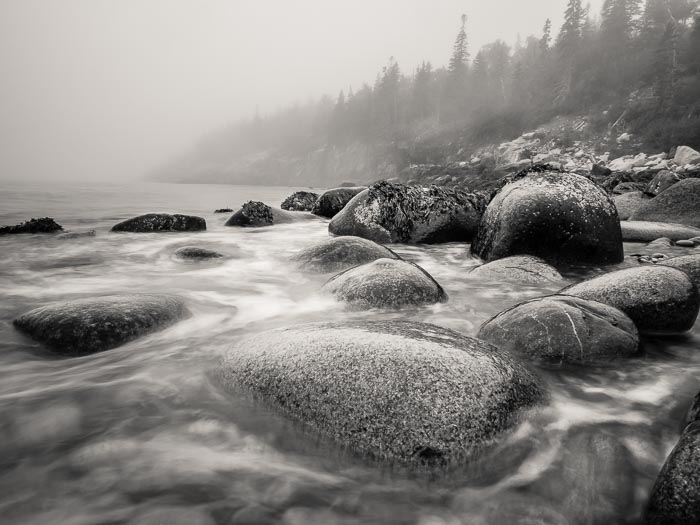 During our stay in Acadia National Park last week, my family and I visited this beach one foggy morning,  I had no real expectations of capturing anything special, we were just there enjoying nature and this special place. In fact, at the parking area it was rather clear and sunny, and I almost left my backpack behind, but thought “better safe than sorry.”But as we hiked further along the half mile trail, a thick fog slowly started to permeate the forest. By the time we reached the rocky beach, we could hear the waves crashing along the shore, but could barely see them.

Over time the fog slowly started to clear somewhat, and I realized it might be a great opportunity to capture some of the mood and feel in this beautiful cove. There’s a fine balance between too much fog, where the light is really flat and too soft, and not enough fog to diffuse the light and provide just enough shadows to create depth and dimension. There isn’t any right or wrong way to photograph in foggy conditions, it all depends on the type of image you want to make, and more importantly the mood you want to convey.

Light, of course, is the ingredient I am most interested in, and therefore I tried to wait for the right moment when it created enough depth in the rocks to make them feel as dimensional as possible. But I also hoped to keep the trees and shoreline in the distance soft and elusive, creating as much contrast between the two. I used a 6 stop ND filter to slow down my shutter speed to 1 sec – any slower and the water became too murky, plus I want to maintain some of the movement that can be seen in the white foam flowing around the rocks. (I also didn’t want to use too small an aperture, diffraction becomes a problem, plus I didn’t really need infinite depth of field, just enough to keep the trees sharp.) I made several exposures, experimenting with the movement of the water, all the while trying to keep the filter dry from splashes. I wanted a very low perspective to make the rocks as dramatic as possible, so my camera was about 2 feet above the rocks, tripod in the water.

While I wasn’t certain about converting to black & white at the time, I knew it might be an option, The color wasn’t that strong given the fog, and I hoped the differences in the colors of the rocks made for more varied tonalities. And it did once I converted to b&w in Lightroom. It also adds an added sense of mystery to the image which I think better conveys how I felt at that particular moment. In fact, my family was much further up the beach at the time, and by the time I reached this particular spot and setup my tripod, I couldn’t even see or hear them, adding to my sense of isolation at the edge of the Atlantic Ocean. 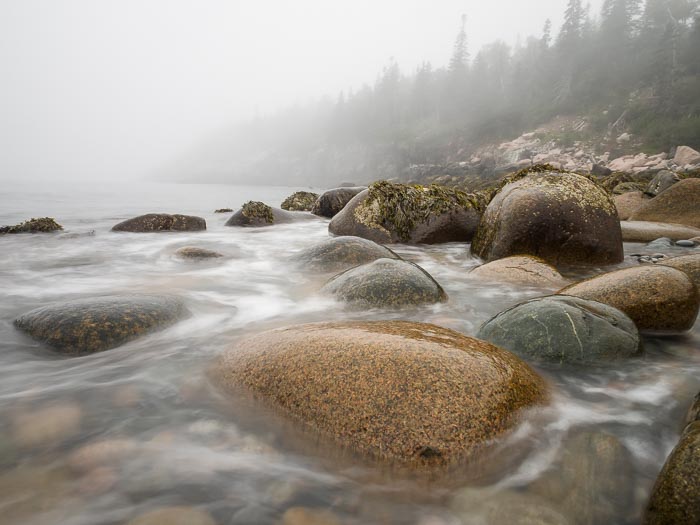 Much of my work is a reaction or response to nature and its infinite variables. Much like my earlier days as a jazz musician, reacting to the spontaneity of the other players in the band, I try and remain open to any situation, without any preconceptions. In a sense, this become the ultimate challenge, because you never know what to expect, or how you will react, and creativity has just a little more room to grow.