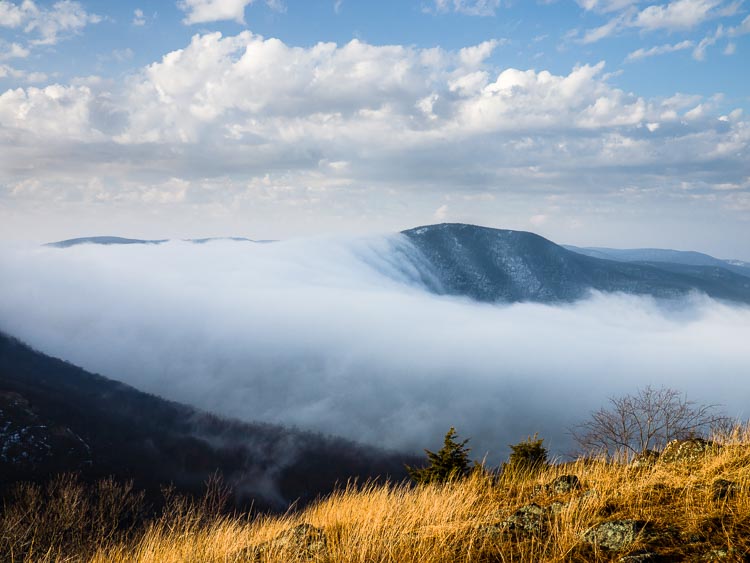 I start each day the same way; wake before dawn, have a small but strong cup of my favorite coffee, and go through my morning ritual. I sit in my sunroom which gives me an 180° view of my backyard and surrounding woods. I read something insightful, write in my journal, meditate, and enjoy some quiet moments before the rest of the family wakes.

I usually try and schedule what I’m going to do each day so that I can focus on my short and long term goals. I even schedule the days I’m going to go out and shoot because that’s the single most important activity I can do for my career, so it deserves priority on my calendar.

Sometimes, however, conditions are so dramatic that I’ll decide right away to abandon any previous plans and just head out to see what the day brings. I had such a day last week when I walked into my sunroom, coffee in hand, and could barely see anything out the windows. A thick fog hung in the air, and I smiled. This doesn’t happen too often, and I quickly decided to head to a local trail with my camera bag.

As a side note, one of the things I rely on is a pre-shoot checklist, which makes sure all my gear is accessible and ready to go when I need it.  This ensures that when I get lucky, I’m prepared.

Once at the trailhead, I began the hike hoping to find some great opportunities with some old growth trees I often photograph. The fog was indeed thick, and with each step my anticipation grew. This particular hike leads to a summit overlooking the Hudson Valley, but I didn’t expect to get that far. I assumed the fog would keep me busy far from the top.

But as continued to gain altitude, the fog started to clear, and I could see blue patches of sky grow larger and larger until the whole sky was blue. The more I climbed, the clearer it got. It was then that I realized the fog was low to the ground, and I was in fact climbing above the fog line.

The mystery and mood of the moment that I had hoped to capture was now behind me, and as conditions changed, so did my thinking.

Take a deep breath…it’s a beautiful day whatever happens.

As I reached the summit I noticed that sunlight was actually going to break through at any minute, and I set up my tripod and camera while I caught my breath. Minutes later, light came streaming into the scene, and I managed to capture a few images. But I didn’t feel connected enough. Something was missing.

Maybe I was working too quickly and had settled into a familiar approach. My initial attempts were busy and complicated, almost forced. I decided to raise the camera position higher to remove foreground clutter. I also changed to a slightly longer lens—from 12mm to 20mm—hoping to simplify the scene.

Perhaps I was thinking too much of what an image might look like instead of letting the image come to me. And I reminded myself yet again that here in front of me was the most important thing, and I only needed a clear mind to see it.

The light appeared again, creating beautiful layers of color, shapes, and shades, and that’s when it all came together. I made a few more exposures, and settled on the composition you see above. It’s an attempt to let the shapes flow from bottom to top—foreground, middle, and background or sky. Bright and colorful, starker  and gray, then bright and colorful once again. There are also opposing textures,  moving from high detail in the foreground, softness and smooth in the middle, and once again detail and rhythm in the sky.

I didn’t want to emphasize any particular subject, but let the whole image lead the viewer from bottom to top, each area holding just enough attention then letting go to the next. This is difficult to do – I have tried many times and failed. Whether I succeeded here depends on the viewer, but I hope it illustrates the importance of starting with a vision.

Vision is what leads you through capture, processing, and certainly printing of an image. It becomes the creative thread that joins each step of the workflow. It’s something I rely on for all of my work, and it should be the prime consideration in everything you do as a photographer.

“There are no lines in nature, only areas of color, one against another.”- Edouard Manet

I always rely on a print to really get a feel for a particular image and see if it resonates with me on paper. If it does, then I know I have a potential image for my portfolio and then it’s just a matter of time to see if I feel the same after a few weeks. I find hanging prints in my studio where I can see them every day is a great way to gain valuable perspective.

For this image, I chose Canson Infinity Platine Fibre Rag, a beautiful fiber based paper with a luster finish and a very subtle  texture. While I do love mat papers, I felt this image needed as much separation between the different layers as possible. There are many ways to achieve that, but adding extra contrast to the image would have removed the softness of the light in the middle and foreground that was crucial to maintain.

The beauty of Platine is that it adds that extra bit of contrast and black density,  enhancing the  separation I wanted without removing the softness of the image. It complements the image and helps convey my vision for the photograph.

Tomorrow I’ll share my Lightroom workflow in a screencast video.

Comments, questions, or feedback? Please let me know below!