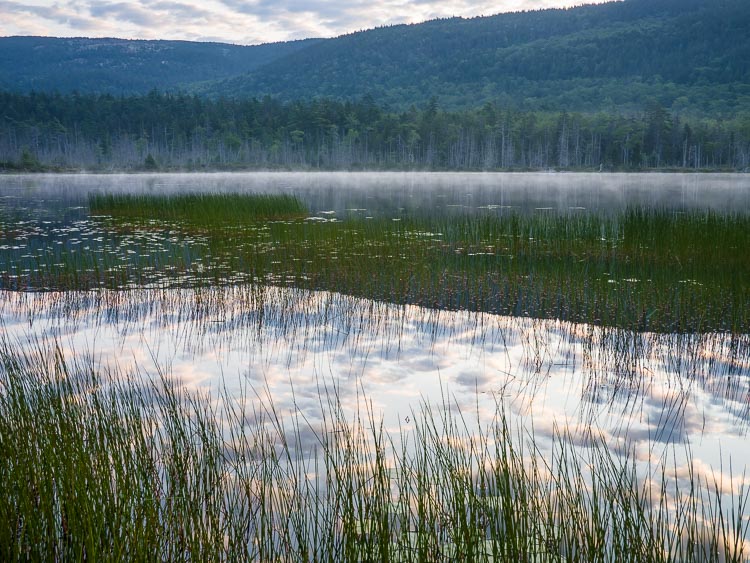 I’ve been traveling for the past few weeks with the family and enjoying a much-needed break after a busy spring and summer workshop schedule. Because my kids are homeschooled, I have the advantage of visiting the national parks and other popular areas after school has started, and crowds are less of a problem. Plus for me there’s no better way to spend time with my family than on great hiking trails discovering the beauty of the natural world.

Part of our trip included camping on Mt Desert Island and enjoying Acadia National Park. Even when traveling with the family I always make sure to schedule some time for myself to go out in the early hours of the day and enjoy a hike alone. Henry David Thoreau expressed it best for me when he said, “I never found a companion that was so companionable as solitude.” It’s an important part of my day, and while I may not specifically be thinking of making photographs, I’m always open to whatever nature may bring.

I didn’t get very far on the trail this particular morning when I noticed this rare combination of light, reflections, and calm water. The day had started mostly overcast, but as the sky became brighter and brighter, a beautiful cloud pattern emerged. But it was the reflections in the pond that really caught my attention and made the whole scene in front of me feel almost surreal and dream like. Soft but vibrant colors filled the entire vista from the grasses at my feet all the way to the sky above my head. And as time passed it became more and more exciting as the light and colors intensified, but never became harsh.

Once again I was in awe of nature’s beauty, and I felt no rush to make images. I took my time seeing as much as I could, resisting the urge to snap way. Trust me, it was a strong urge, but I knew I needed to slow down to really resonate with the moment visually and emotionally.

While very busy in terms of textures and patterns, it was rather soft and balanced in terms of contrast. Understanding what the key elements are in a potential composition is extremely important in deciding how to arrange those elements. Decisions such as what to emphasize, what to remove, and how to lead the eye through the image are critical to conveying what was going through my mind. I certainly wasn’t thinking about grasses, water, trees, sky. For me, it was a tapestry of color and shapes, divided by simple diagonal lines.

I set up my tripod at the edge of the pond at about eye level. That’s rare for me as I often prefer lower perspectives, but going lower would diminish the diagonal lines I wanted to emphasize.

Rule #1: never follow any rules if breaking them makes a better image. Anyone who says “always do this or that…” should learn Rule #1.

I make a point of this because it’s so easy to fall into creative patterns, especially when those patterns have lead to success in the past. This is prevalent in photography today. We’re inundated with rules, formulas, and an ever growing army of gurus that want to show you how to make images that will get the most likes online. Sorry for that rant, just needed to get that out there after several emails about rules and when to break them. Make the best image you can make, that’s all that really matters.

Ok, back to making the image. I chose a 20mm lens for my Olympus E-M1 (that makes it a 40mm) because I didn’t want to go super wide but instead limit my field of view so that I could fill the whole composition with the colors and patterns. Making the diagonal lines extend to the edge was critical for me, and that increases the abstract nature of the image. As photographers, we start with chaos, and through the use of focal length and careful composition remove until the essence of the idea remains.

I tried a few different compositions including removing the sky all together but decided to include part of it to reinforce the diagonal lines. That was an important decision I thought, because removing the sky emphasizes the trees in the background and the reflections as well. But ultimately I decided the continuing pattern was more powerful, as well as the contrasting highlights and shadows. But I was never really sure until l reviews the images a few days later. 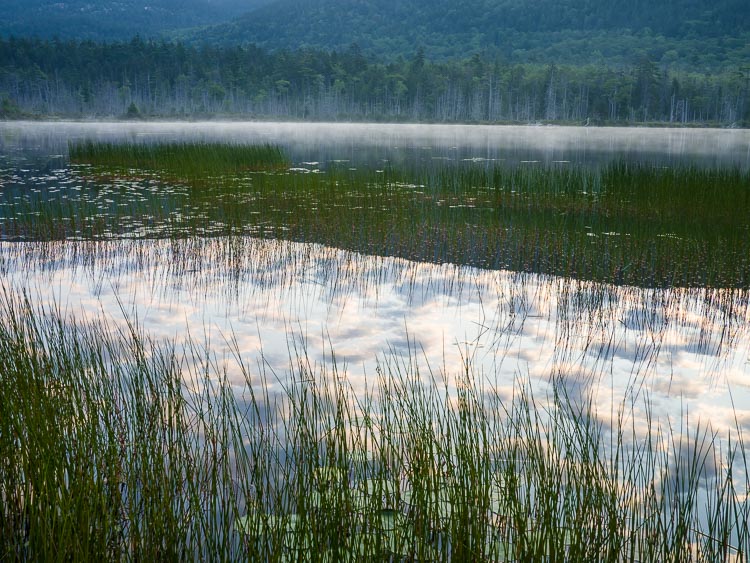 Here’s an alternate composition which I ultimately decided was not as strong without the sky.

Camera settings were basic: f/8 @ 1/30 sec, ISO 200. That’s plenty of depth of field to capture the details in the foreground grasses as well as the mountains in the far side of the pond. I manually focused on a point just in front of the grasses making sure to focus on the waters surface, not the clouds. With no wind whatsoever, I benefitted from a mirror like reflection and no movement of the grasses, so 1/30 was more than fast enough.No filters were needed for the image I wanted to make.

In Lightroom 6, the most important editing decisions were to set the proper white balance, white point and black point. This is subjective of course, but for me it was important to keep the proper feel and mood of the image. Too far with the white or black point (which results in higher contrast), and the subtlety of the colors would be diminished. Again, see Rule #1.

I also applied a few adjustment brushes to manage some of the light and dark areas. I dodged (lightened) the grasses in the middle of the pond, and lower left slightly, and also lightened the fog along the far shore. It certainly caught my attention when I was there, and so wanted to make it feel more “alive” in the image. I also darkened the sky very lightly to emphasize the beautiful cloud formations. 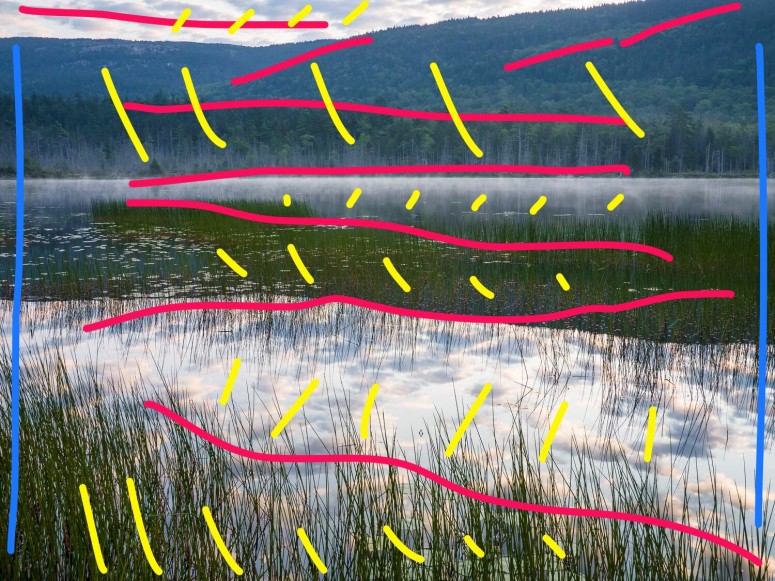 I made my initial print on Canson Infinity Velin Museum Rag, a velvety fine art paper I hoped would complement the softness of the moment, yet retain the detail in the highlights and shadows. The slight texture of the paper enhances the overall depth of the textures in the image and gives it that extra “dimensional” look I love to create in landscape images. 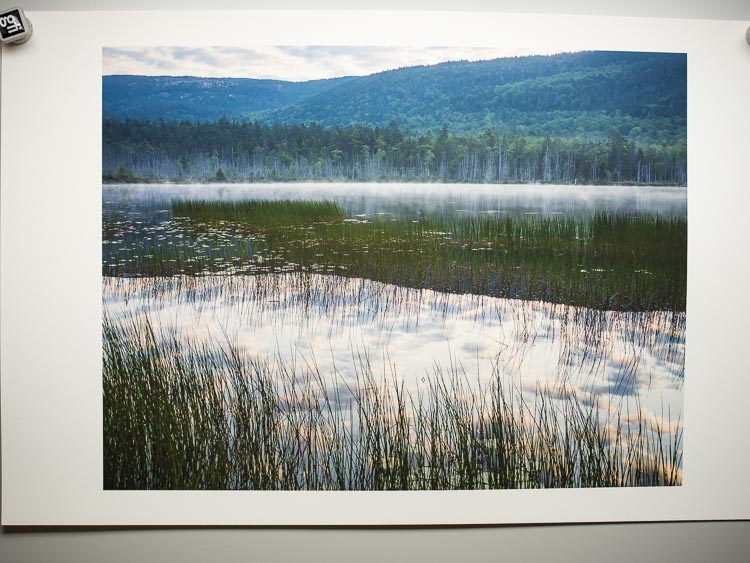 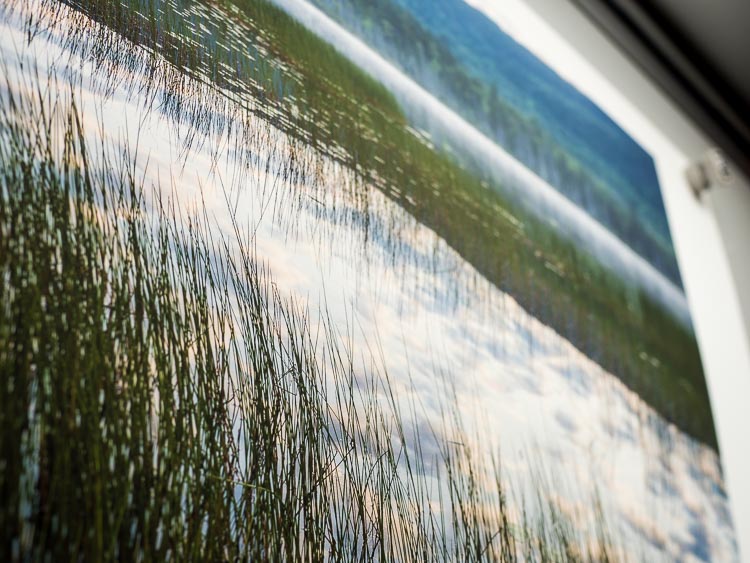 Canson Infinity Velin Museum Rag has a soft and painterly look, yet retains the high detail so important to any landscape image.

I hope that gives you some insight into how I made and printed this image. Feel free to leave your questions and comments below, I’m always eager to help and learn from your perspective. Thanks for reading!

BTW– I still have a few spaces remaining on the Acadia Autumn Adventure workshop coming up in October. It’s the best time to be in Maine photographing the seacapes and glacial lakes of Acadia. Learn more here!