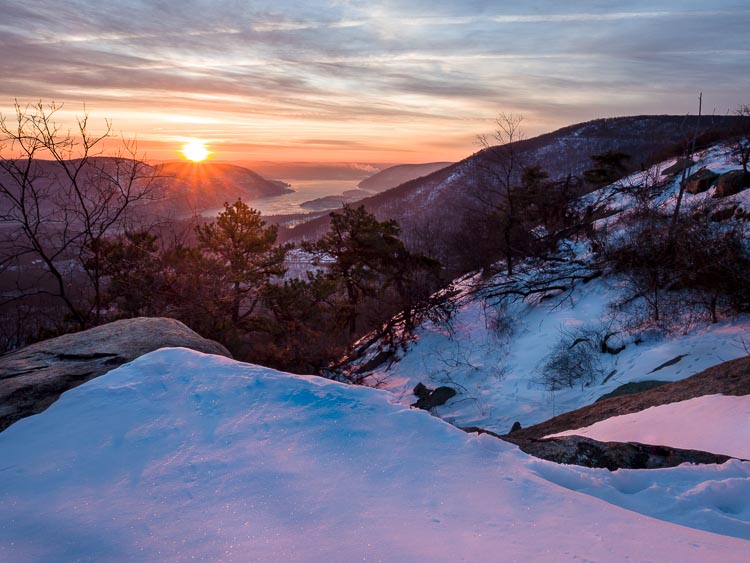 Snow is always something that gets me to brave the cold and head out on the trail. It’s not that I don’t like the winter, because I do, but I don’t tolerate sub-freezing temperatures very well. But with a little preparation and the right clothing, I never pass up a hike in fresh snow. There’s something special about the solitude that a snow covered trail creates that I seldom feel anywhere else.

Keeping my hands warm is my biggest problem as I suffer from poor circulation in my finger tips, and so I rely Hot Hands Hand Warmers which work great. They last for about 5-6 hours, and I put them into my jacket pockets as soon as I get up. Once I’m into a hike, my pockets become small heaters that I can slip my hands into when the gloves come off to work the controls on my camera.

The temperatures were in the low teens when I headed out on this pre-dawn morning, and the sky was fairly overcast. However, I could see breaks along the horizon and I wondered if that might create dramatic light, as it often does.

I was heading to a familiar place, the rocky summit of a small mountain in the lower Hudson Valley with expansive views of the area. Hiking up bare rock covered with snow and ice is not something I attempt unless I’m wearing micro-spikes, so they’re always in my backpack just in case.

At the summit, the sky was mostly grey except towards the east which was a golden red. There were many potential compositions, and finding a place to start can be difficult. But I always rely on the simplest approach-watch the light. And as the sun crested over the horizon, it bathed a small part of the foreground with a delicate yet beautiful warm glow, and I used it to anchor a composition that I felt best captured the scene.

Tonal variation, what painters call values, are really important for creating the illusion of depth in a photograph. And controlling those values, or contrast, is also key to the type of image, and the emotion you want to convey.

In general I prefer not to have the sun in my images because controlling the overall values becomes much more difficult. The sun expands your tonal range dramatically, and that means shadows become much less subtle and nuanced, elements I try to maintain in my photographs.

But I couldn’t avoid the sun in this case in order to keep the composition that I felt was strongest. Relationships are everything in composition, and so generalities are always at the mercy of specific opportunities.

The are several critical factors that I think about when deciding to keep the sun in the image.

If I don’t need to maintain some shadow detail in the darkest darks, I let them clip. Don’t be afraid to clip deep shadows- they add depth and “soul” to an image. But most important, it’s a question of how they work within the whole composition; the way they balance visually with the middle tones and highlights.

That was my approach to the composition here, and ultimately it becomes a question of how to lead the viewer through the image in the strongest manner possible. What did I feel and how can I convey that to the viewer. 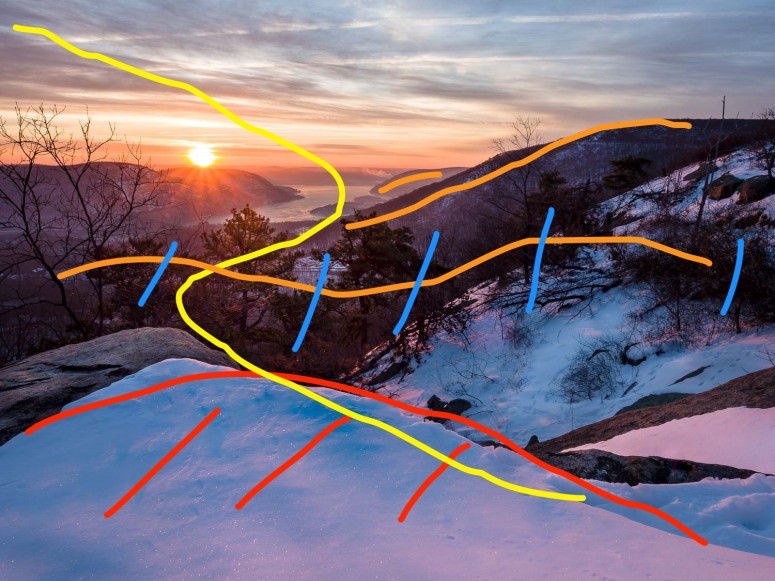 Compositional analysis: The red area at the bottom defines the foreground and anchors the image, both with its shape (diagonals left and right) and with light. The blue area define the middle ground and darkest values, the bridge from the foreground to the sky – it adds the important depth. The orange lines highlight repeating shapes that also add depth and movement. The yellow line shows the general direction that I want to viewer to follow, and the overall “frame” of the composition.

I processed the single capture in Lightroom 6.4, using a variety of brushes to suggest areas of highlight and shadow, otherwise known as dodging and burning. This further reinforces depth and lets the light take center stage.

Notice how the small bushes on the right side of the frame are simply dark shapes, creating the “middle ground” between the lighter foreground and background where the sun is. This area “bridges” the light from front to back, again adding tremendous depth without the need for shadow detail.

A final print is where I decide if the image works for me or not, and I made a proof print on an Epson P800 and Canson Infinity Platine Fibre Rag 300gsm. I thought about paper choice for while, but what I think is most important is the weight and depth of the darker areas balanced against the single point of light and it’s effect on the landscape. Platine Fibre Rag, and its great ability to reproduce deep shadows, conveys the “feel” of the image beautifully.

It was dark and almost ominous when I made the image, with the warm light along a small part of the horizon as the only variation. Platine is great for this image (notice I didn’t say this “type” of image, because every image must be evaluated individually,) and with careful soft-proofing, the print maintains its overall brightness and doesn’t look “dark.” This is a common complaint I hear from students, but can be corrected with careful editing, a calibrated monitor, and the proper use of great paper.

Of course the paper is only as good as the ability of the printer to produce great black density and color, and the Epson P800  excels at both. (Stay tuned for a field test on the Epson P800 and how to best optimize Canson papers for it.) 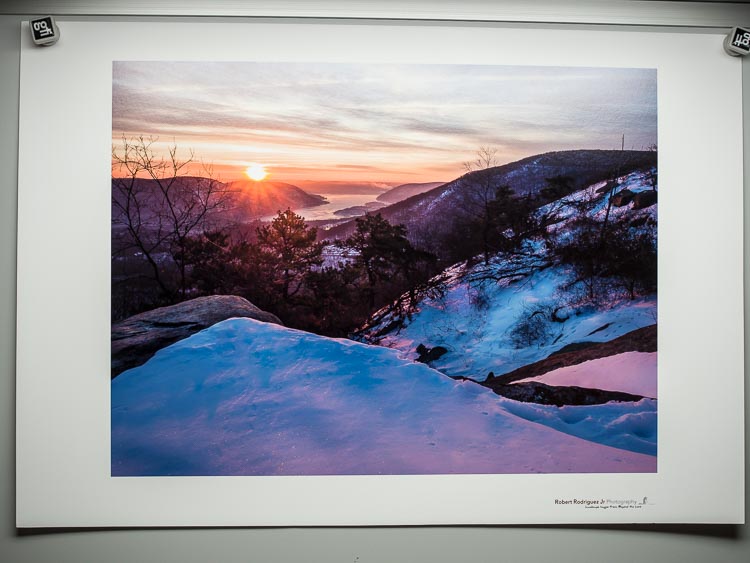 Printed on 13 x 19 Canson Platine Fibre Rag on an Epson P800. Lots of contrast, yet it remains smooth ad soft, like the light in the original scene. 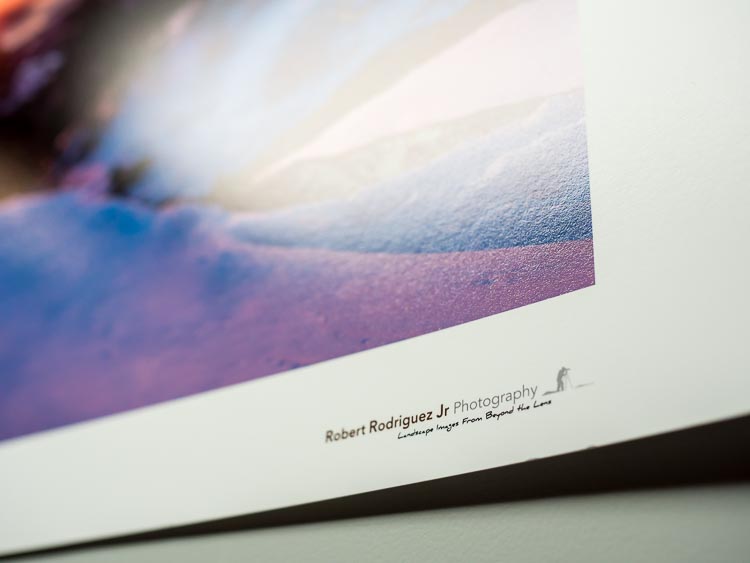 Here you can see the very fine surface texture that Platine Fibre has that differentiates it from a smoother but similar paper like Canson Baryta. I love how this texture is barely visible yet adds a nice depth to landscapes with fine texture; snow and distant mountains both gain extra dimension. 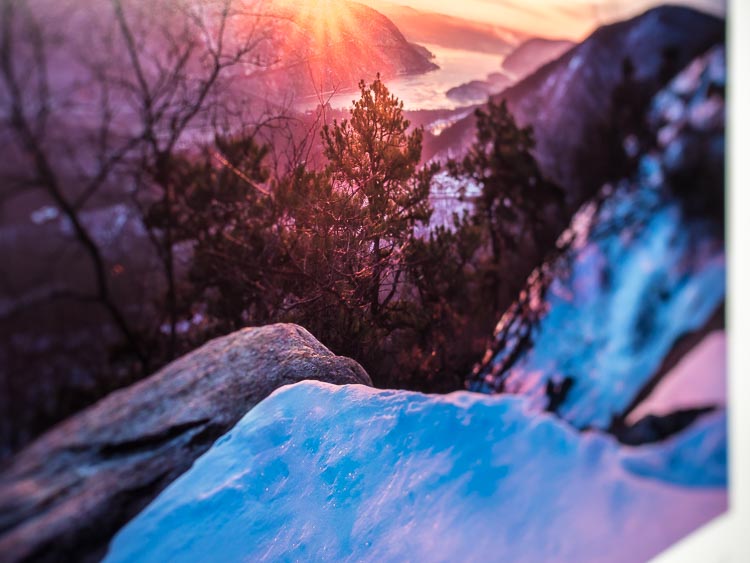 Detail is sharp yet organic and natural  – again conveying the softness of the scene without losing the essence of the textured landscape.

I hope this in-depth explanation is useful, and please don’t hesitate to share your questions or feedback. It’s all a learning process, and I’m still an infant in my creative exploration. We can all learn together with the skill every infant is born with; curiosity. Thanks for reading!