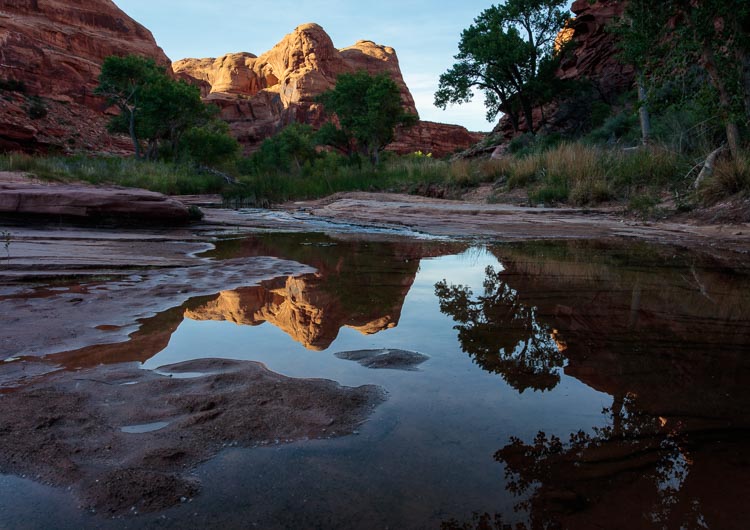 I’ve been a bit quiet here on the blog for a few reasons, mainly because of a busy travel schedule. I’m currently in Moab, Utah for the upcoming Arches and Canyonlands workshop, just days after a ten day trip to northern Italy with my family. That was mostly a personal trip but I did manage to capture a few interesting images which I will post soon.

Another reason is simply a lack of time due to several projects I’m working on. But no worries, I am very much committed to the blog and sharing as much as possible in hopes that if helps you in your creative pursuits.

I wanted to share an image I captured a few days ago while hiking in one of the lesser known areas of Arches. It was late in the evening and I didn’t think I would have any opportunities to make the kind of image I had in mind. I didn’t start the hike with a specific image in mind, that’s something that develops as I respond to what I see. In fact I wouldn’t even want to start with a pre-visualization because I think that inhibits your potential connection to what’s actually happening in nature.

Lets not forget, Ansel Adams talked about “visualization,” which means that in real time he formed in his mind a picture of what he saw and felt. That’s a dynamic and fluid situation that keeps you engaged with nature. Where is the light at every instant? How is if affecting the tonality, highlights and shadows, and most importantly your internal dialogue?

So as I thought about where I was and how I felt, I imagined an image that felt cool and dark, yet had something that captured the beauty I saw and the gratitude I had for opportunity to experience it yet again. But it was simply too dark and the contrast too extreme to make an image of the interior of the canyon and the golden light hitting the walls above. That’s when I came across this pool of water and wondered if I might have enough of a reflection to “fill” the foreground with the same warmth and light above.

I got my tripod fairly low to the ground and worked the composition for what seemed like too long of a time considering the light was slowly disappearing as it moved up the canyon walls. As I looked through the viewfinder, I realized it was important to keep the entire reflection of the tall rock intact, and also important to get a sharp silhouette of the trees on the right. I didn’t want to retain shadow detail, I just wanted the shapes because the it’s the blue sky in the reflection that adds the contrast, the “cool” element I mentioned before. It keeps the feeling of being inside of a canyon, which felt cool. Too much detail in the reflection or the canyon background and the image becomes too busy, less clear.

When I first edited the image in Lightroom, I thought I wanted to lighten the foreground, but I found it moved away from the feel I wanted the image to have. So I tried darkening it even further and that made the silhouettes more effective, and the blue color of the sky darker and richer. A little bit of highlight recovery for the brightest part of the sky and I was basically done. I must admit I was tempted to lighten some of the trees and other foreground elements, but every time I did, it moved away from the image I had in mind.

It’s so tempting to repeat the things that have worked in the past, or to follow conventional ways of capturing and processing our images. But as I always tell my students (as a way of reminding myself), use your eyes. Look at the image on your monitor and decide if it resonates with you, never mind what the controls or camera settings are.

There are no formulas, no presets, and no guarantees in creative photography. The only thing you can be confident in is your emotional connection to the subject. Then you try again, and again, and again.