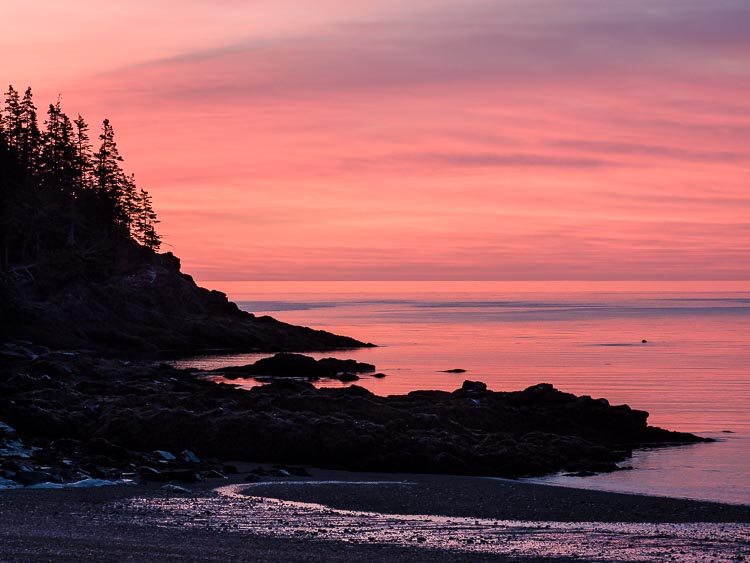 So much of landscape photography is about being open to discovery. We may have an idea of what a potential image might look like, but that’s only possible given certain circumstances, many of which are usually out of our control.

That’s really the story of this image. On several visits to this shoreline at Herring Cove in New Brunswick, I considered several approaches to making an image. What I could use as foreground elements, how I might position my camera, what lens and focal length I might use.

I imagined an image that featured the rocks that only become exposed at low tide, perhaps with more rocks in the middle ground to create depth, and finally the many different hues of green in the trees in the background to create color variation and interest. The sky area would provide the cool blues that so often help add depth to an image—as we know warm colors come forward, cool colors recede. And so I had a plan.

On my final visit at sunrise however, nature had her own plans as usual. And this to me is the moment when photography becomes most exciting, when the chance to enter a “flow” state is greatest. Plans and preconceptions give way to single-minded attention and spontaneity.

At least they should if you want to give as much of yourself as possible to the moment; where flow happens and your creative instincts can take over.

As I looked at the scene, I decided that the sky, the colors, and the light were my subjects, certainly not what I had envisioned before. And so I reversed my previous idea for a composition. I would use the colors and patterns of the sky to create the image, and balance that with the foreground elements as a compliment.

The dark silhouettes of the trees and shoreline became areas to contrast the energy of the colors—a passive area that provides even greater interest to the active area—the sky.

Dark shadows, especially silhouettes, also influence the rhythm of an image, in that they slow down the viewer’s eye to some degree. This influences the feel of an image, and helps to focus the attention on what I wanted to convey—that very elusive quality we all need to share in our images, emotion.

From a design standpoint, I used a basic diagonal from bottom right to top left. The reflection in the immediate foreground served as a way to enter the image, and also provided the repetitive semi-circular shapes that I played with to lead the viewer’s eye up to to the tress and sky. There are three of them, which is a fundamental element you should always look for in your compositions. Three similar shapes, patterns, or colors for example, is almost always visually interesting.

But all of that is secondary to the sky, and this is where I had the greatest challenge and difficulty. How much sky? Where do I place the horizon? Which part of the sky has the strongest colors and greatest variation? These are all questions I asked myself in the brief moments I worked this scene, because as you well know, time is the other factor, changing the conditions by the second. Ultimately what I’m after is the simplest image possible that contains the essence of my experience.

The only way I know how to solve these kinds of problems is to remain engaged in the energy of the moment and focus on responding, not reacting. My definitions are as follows:

The only way to be more “responsive” is to eliminate as many variables as possible that you can control, so that you can focus on the real task, the creative process. When you don’t have to think about lens choice, focal length, exposure settings, and compositional options, you’re free to focus more on how to capture a scene as strongly as possible, aesthetically and emotionally.

I don’t care if the images I’m capturing work or don’t work when I’m in the field, I only care about responding. The histogram is the only thing I check on the LCD to make sure I’ve captured the proper tones. I know that may sound hard to believe, but what other option is there really?

The time to judge and evaluate your images is when the moments to respond are over, which are often brief and elusive. For me that time is back at home on my computer.

As long as I’m in the field, I’d rather take advantage of that opportunity, that privilege really, to keep my vision (both physically and emotionally) connected to the reality around me. Plus research has shown your brain works much better when you remain engaged on a single task versus switching between the creative side and the editing side—from left to right sides of the brain.

I made eight images starting at 5:42am and ending at 5:46am, and then the color was gone. You can see in the screenshot of Lightroom below that most of what I struggled with was the upper left corner, balancing the trees, the tones in the sky, and the relationship of both to the reflection in the lower right. There’s also a nice tonal line in the sky upper right that I also considered, but I felt it wasn’t as important as the lower right in terms of establishing the strongest diagonal. 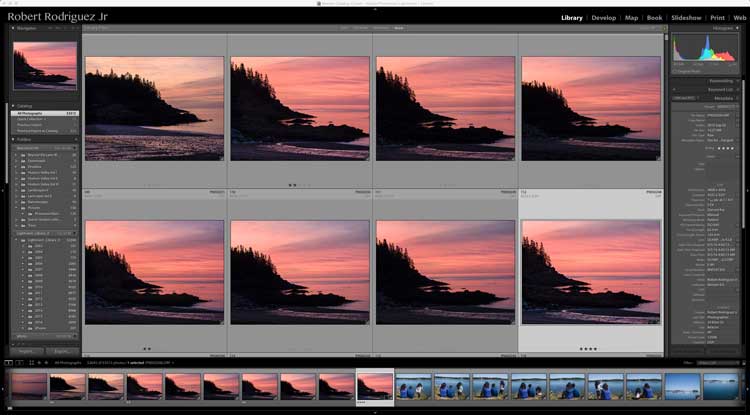 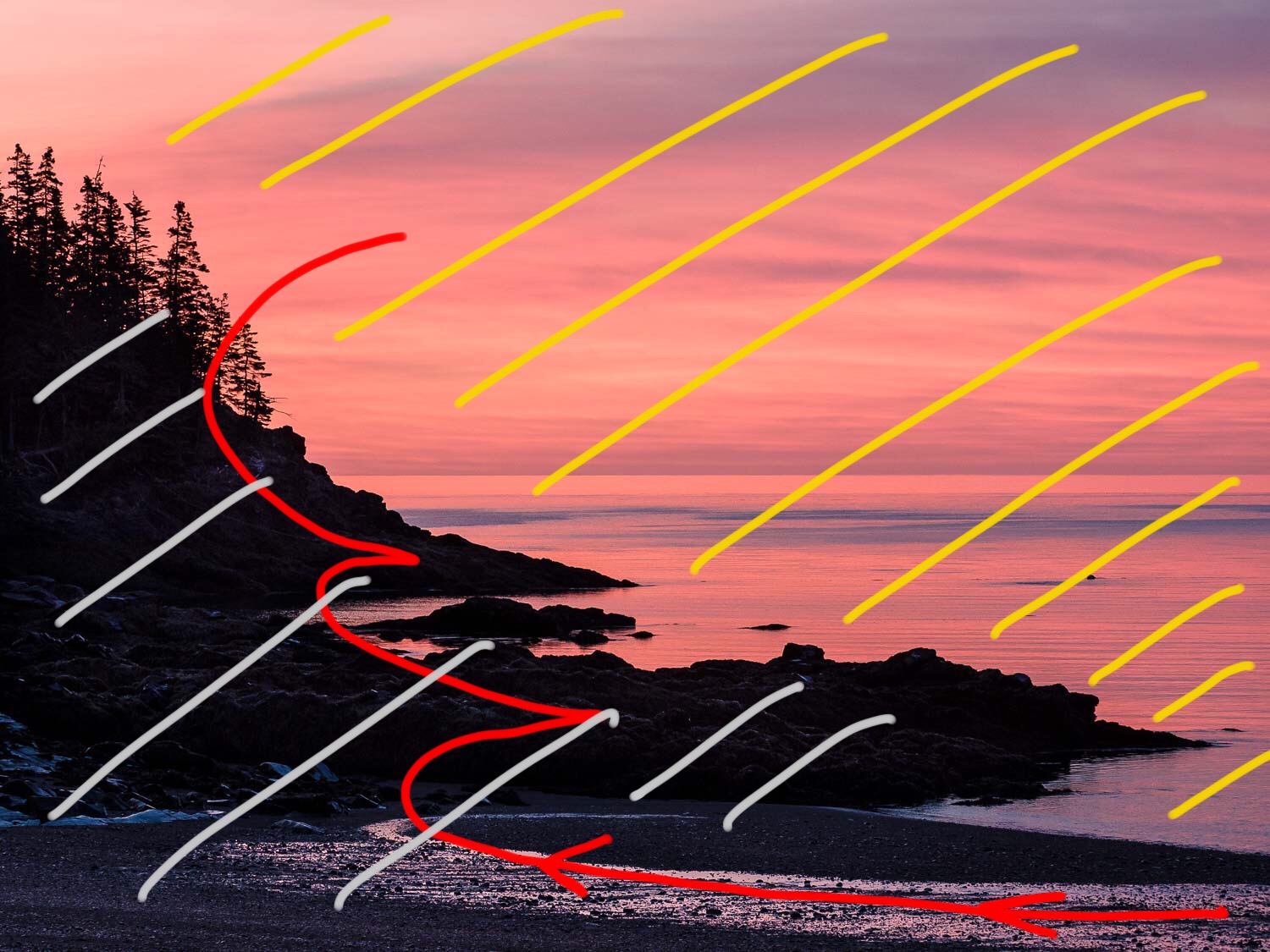 The red lines show the general path I want to viewer to follow through the images based on the strongest lines along areas of highest contrast. Notice they flow along a diagonal path and divide the image between the “active” area (shown by the yellow lines) and the less active, or “passive” area (shown by the grey lines. The concept of active and passive areas influence the unity of an image, its visual rhythm, and the over focal point – in this case the vibrant colors and patterns of the sky. BTW – I never really think about the labels – “sky” for example, when composing, but rather about color, tonal values, lines, and how they all relate. 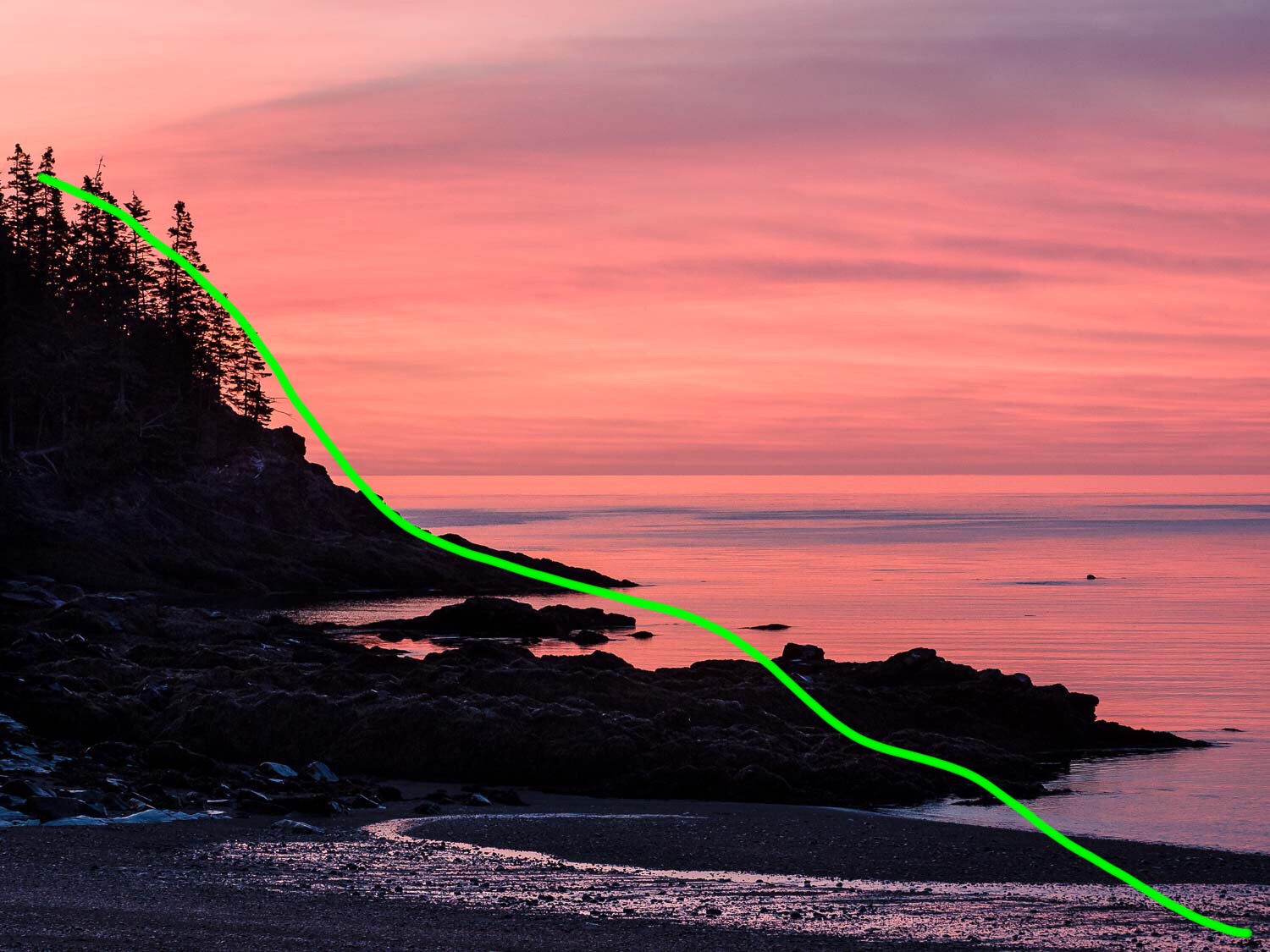 This to me is really the key to the image, where to place the division between the main axis of the image – color vs no color, detail vs very little detail, and dark shadows without any life vs the real life of the image. The reflection in the sand at the bottom is critical in so many ways, yet is only complementary, like the intro to a song. 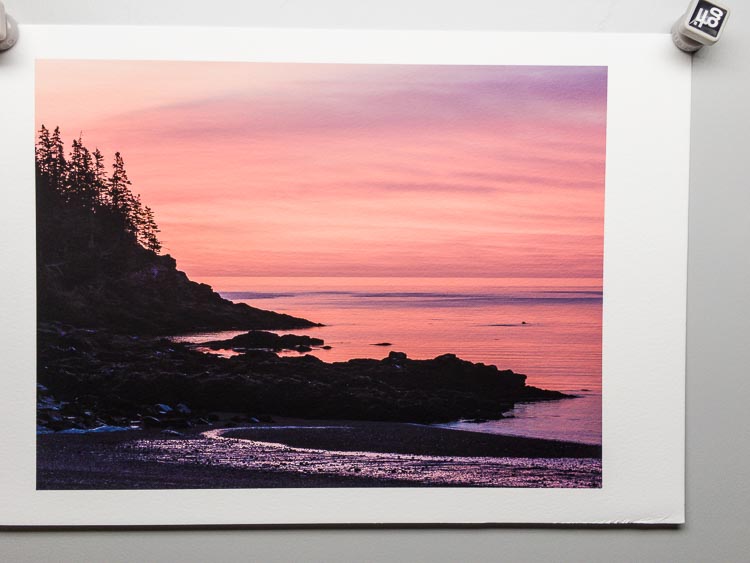 Here’s a print of the image on Canson Infinity PrintMaKing Rag (printed on an Epson P800), probably my favorite mat papers for images where I really want to de-emphasize the photographic nature of an image, and bring attention to shapes, colors, patterns, and the feel of the relationships they create. Shadow detail is not the key here, but rather how the tones and colors work together without overpowering each other. A mat paper is great when nuance and subtlety is most important to the vision of the photographer. For me it conveys more of what I felt standing on the beach that morning.

None of this is easy or obvious, and comes from years of practice and error, lots of error. But hopefully these “notes’ provide you with idea and inspiration you can use in your own path, which is certainly as valid as anyone else’s.

Please share your thoughts and questions, it’s always an honor to read what you have to share.