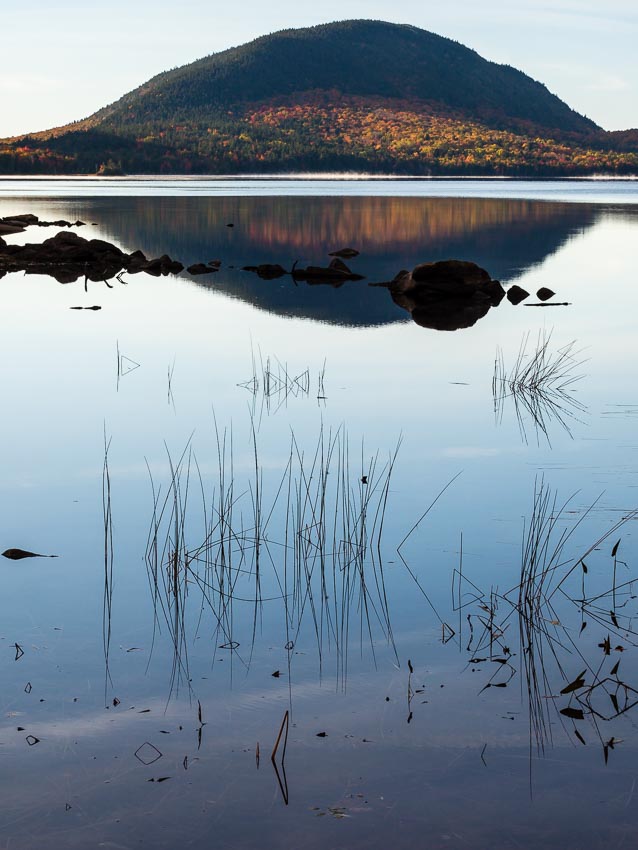 In my previous article, Photographing the Familiar with Fresh Eyes, I provided some suggestions for photographing familar landscapes that have work for me as I return to favorite locations over and over again. I thought I would share some of what that looks like in practice on a recent outing to Eagle Lake in Acadia National Park. I used most of those suggestions to some degree or another in making this image. The important thing to remember is that I don’t think of them as a checklist, but really just an approach that helps me stay focused and inspired.

I was visiting Eagle Lake before an upcoming workshop, thinking about making some basic pencil sketches in my sketchbook. I’ve photographed there many times before, so I wanted to try something different yet creatively challenging.

But, I always have my camera with me, so I couldn’t resist making a few photos at sunrise. (I didn’t like the results once I reviewed them later.) Afterwards I decided to walk around the shoreline enjoying the morning and stopping here and there to notice the light and make some quick sketches. As I continued to walk the shoreline, the quality of the light really caught my attention. It was soft and even through most of the scene, with a small amount breaking through the clouds and illuminating colorful foliage on the distant mountain.

The stillness of the water created a wonderful bright reflection of the sky, but since most of the grasses and rocks were not in direct light, their graphic shapes created silhouettes that stood out and added depth and interest in a simple way. This also created a reduced contrast range which would enhance the softer quality of the entire scene, and allow me to capture it in one exposure.

Light was the single most important part of my decision to consider making the photograph. That already helps me differentiate this image from the others I’ve made because it’s unlikely I have captured this type of lighting situation before.

There were lots of foreground elements I could have captured with a wide angle lens, but that would have diluted the essence of the image, the light. More trees along the shoreline, more foreground grasses, more rocks—none of that would have added to the image, it would have detracted. All I needed was the basic essentials and the rest is left to the viewers imagination.

Also, a wide angle lens distorts the scene, pushing the background further into the distance, and with it the light I wanted to make more prominent, not less.

I used an Olympus E-M1 with the 40-150mm f/2.8 lens mounted on an FLM tripod set to 96mm to compress the scene, yet maintain some foreground to background movement with the grasses in the lower part and the gradation of the sky leading the viewer up to the color on the mountain and the sky. The depth is maintained I think, by having larger elements become smaller as they move up the composition, and by the silhouettes balancing the brighter, more colorful parts of the image in the upper half.

The vertical orientation is critical because it enhances that visual movement from bottom to top where the lines and center of interest are. Unity is provided by keeping those elements as simple as possible – just enough sky, water, foreground, and background. Too much clutter in the water and the viewer never really gets past that part of the image, which is the largest. It’s the gradation that provides the movement, with some graphic elements to provide tension and context.

I was aware that depth of field might be an issue, so I used an aperture of f/11, which on my mirrorless camera (M4/3 sensor) at 96mm is plenty for this image. The foreground grasses were at least 100 feet away from me, so I was confident I would have enough to render the grasses and the distant mountain relatively sharp for a large print.

Finally, being aware of how fleeting this situation was, I wanted to keep all of my focus and attention on nature, not the back of my camera. Sure, I checked the first few images to make sure my histogram wasn’t clipping highlights or shadows (otherwise I don’t know if I’ve captured all of the available tones in the scene). But after that I watched the light intently as it grew stronger and stronger and eventually became too harsh for the image I had in mind.

I don’t get this right all the time, in fact I fail most times, assuming we define failure as not making a successful image. But for me it’s always a win-win situation, because I continue to practice presence and awareness, and try not to make any judgements before I see what nature has to offer.

If you can learn to simply recognize the difference between your judgments and what’s actually in front of you, captivating images that are also more meaningful will come your way.

I printed this image on Canson Infinity Print Making Rag, which is a mat paper with a very distinct but fairly smooth texture. That texture helps to unify the image adding some surface interest to all parts of the image— the water, the mountain, and the sky. Smooth areas in the image are not compromised by the texture because the strong graphic shapes and the light are what create the path for the viewers eye to follow.

The lower contrast range of a mat paper also helps complement the softness of the scene—providing richness in the shadows without making them too dominant. Dmax or density—the amount of black ink a paper can hold with clarity—is important when an image can benefit from it.

However, in this case, it would actually distract from the feel I want to impart with the image. Knowing what you want to convey with your image is critical to choosing the right paper. It gives you more creative control of how a viewer perceives your work, a personal and important aspect of developing your vision.

If you print your own work, this too helps to interpret the familiar in your own unique way.