A recent discussion I had with a friend brought into sharp focus some of the things I’ve been thinking about recently. Specifically, the way technology is fundamentally changing everything about how we make and share images. It’s also having a dramatic impact on our perceptions, sending many of us into denial.

Let me elaborate. My friend and I were out together on a sunrise photo shoot. Towards the end of our morning, as we were leaving, she made a few last minute images with her iPhone. As we walked back to our car, she said,

“You know, I’m embarrassed to say this, but sometimes I get a better image with my iPhone than with my DSLR.”

“Why is that a bad thing?” I responded, “I think that’s great. Isn’t the goal to make the best images possible?”

I don’t remember exactly what was said after that, but the theme of the discussion was about the reluctance to accept some basic facts about current technology. And on many occasions now, I have heard friends and students express their disbelief about how in some instances their iPhones made a better image than their DSLR did. How can this be? And why the disbelief?

Let’s take a look at the latest iPhone within the context of cameras, not phones. That is the first mind shift we have to make. There is little in common between an iPhone and a traditional phone aside from the fact that we can communicate with someone else via voice. Not to mention the fact that you also have to be of a certain age to be familiar with a rotary phone.

My fifteen-year-old son has never used a rotary phone and has no concept of how advanced it was at one time. How can he? The device he now carries in his pocket and takes for granted is not a device to talk to people, it’s a full-fledged computer with a constant connection to the internet, and the worlds collective knowledge.

But it’s more than that. It’s also a miniaturized version of a DSLR. The latest iPhone 8 Plus has a 12MP sensor (up to 63MP in pano mode!), wide-angle and telephoto lenses, and an f/1.8 aperture, optical image stabilization, and a wide-gamut (P3) 6” LCD display to preview your images. The iPhone X is even more capable.

With Adobe Lightroom CC for iOS, it can capture in Raw and sync the images back to Lightroom Classic CC as DNG files to be edited on your desktop computer. This is not a phone in any sense of the imagination. It is the future of photography in my opinion.

Now let me make some clarifications. I am not giving up my DSLRs any time soon, nor am I saying in any way that you should either. I am also not claiming that mobile cameras are superior. DSLRs provide many advantages including:

Yet the fact that I’m even comparing them is a clear sign that the gap is closing faster than you might realize. A DSLR is a tool designed for specific situations where control and performance are required. And that is still a vast majority of cases for many of us. But not in all cases. And as the quality of mobile camera continues to improve, that distinction will continue to shrink for many people.

However, as serious photographers, we resist the very notion of that idea. It’s embarrassing to carry thousands of dollars of gear in our backpacks yet capture a better image with our mobile device. Why so?

Is it because it challenges our egos? Or because it lays bare the fallacy of what the camera manufacturers promise? Does it expose the marketing strategies of the photo industry and how they have convinced us to spend our money?

Does it confirm a truism that we often cite, yet don’t fully accept? It’s not the hammer, but the carpenter that makes the difference.

If you think this is conditionally true now, wait five more years and see what Apple and Samsung have up their collective sleeves. The world of photography is going to change more than you can imagine, and our perceptions will have to change accordingly.

Yet as the saying goes, the more things change, the more they stay the same. And never has this truer that now when it comes to visual art.

I believe there are two fundamental skills that will allow you to succeed in the future.

Developing these two skills to their fullest potential will let you photograph with confidence and conviction, regardless of the tools used. For example, I currently use an iPhone 8 and several DSLRs to capture images. I love and use them all without prejudice or judgment. A meaningful image is what matters most.

Buy and use what you want, what makes you happy, what promotes your creativity. But realize that success is what you define it to be, and that is rarely if ever determined by how much money you spend or the gear you use. It’s all about you and how you see the world.

Don’t hide behind your gear—share your emotions and feelings in whatever way possible, with whatever camera (or phone) you have. That’s the only thing that makes a real difference in the long run.

Just to emphasize this dilemma, I have been conducting an experiment in my printing workshops. There were two parts to this experiment: a) Could I make great looking 8.5×11 prints with my iPhone? b) Would anyone be able to tell the difference between those and prints from a DSLR?

Part A of the experiment was a resounding success. I made 8.5 x 11 prints from several images I made in Death Valley NP and they looked absolutely great. I edited the DNG files from my iPhone in Lightroom Classic, then printed them on Canson Infinity Platine Fibre Rag and Rag Photographique. The quality blew me away, and everyone else that saw them agreed.

In Part B of my experiment, I displayed several of the iPhone prints side by side in my viewing station and asked students to pick out the ones made from my iPhone and those made with my DSLR. They looked and inspected, and thought they could detect the differences. In all cases, they were wrong because they were all made with my iPhone.

I even decided to push the limit and print one at 11 x 17. Again the quality was surprising and most could not tell the difference. I’m not talking about pixel-peeping here since under a loupe I’m sure you could see differences. But in real-world situations (framed on the wall,) I’d challenge anyone to see the difference.

For this to work, the images were captured very carefully. By that I mean I didn’t try to push the limits of the iPhone’s capabilities. Plenty of light, steady hand (or tripod,) and careful focusing are paramount. But given those constraints, the results are impressive, to say the least. 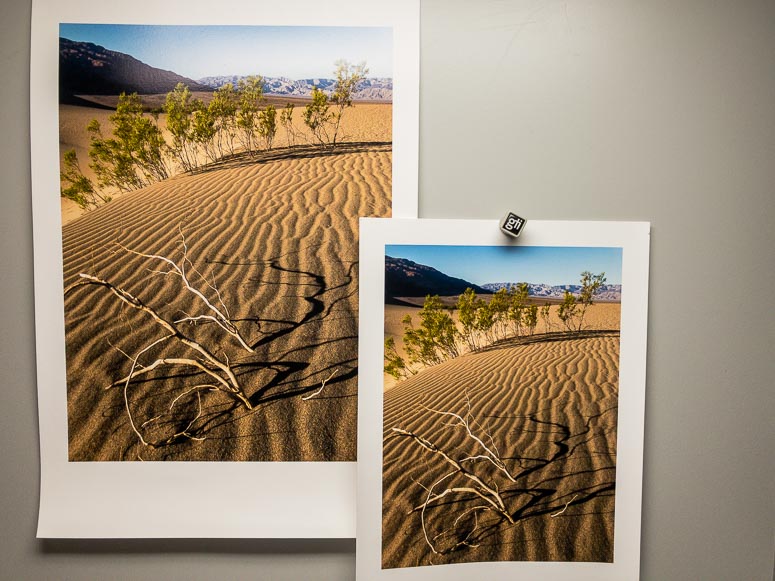 Prints made from images captured with an iPhone 8.

I’m excited about the possibilities for the future – from all of my cameras!