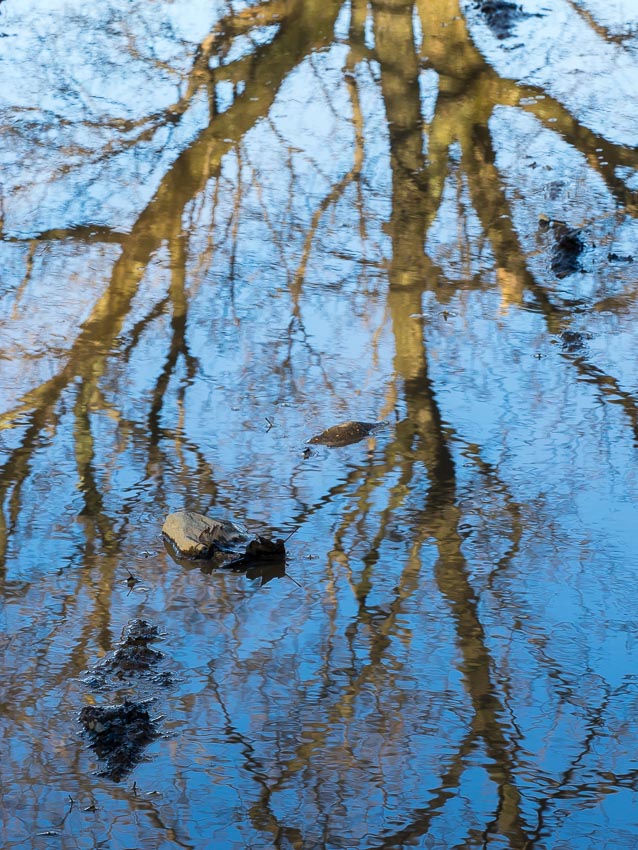 I’ve been pushing myself recently to resist my first reaction when I feel motivated to make an image, and instead try to look deeper, and for longer periods of time. Not that this is anything new in general, as I’ve talked about this approach many times before. But it’s so easy to rely on what’s worked in the past, or default to what’s comfortable. And so it’s always a good habit to ask yourself if you’re truly exploring all of the available options.

That was certainly the case on this particular morning when I saw this small pool of water reflecting the blue sky. I liked the gradation of the colors, and the ripples caused by the wind, as well as the branches creating a nice color contrast. But the more I tried to simplify the image (thinking it was too busy) the more I felt something was missing.

That’s when I realized that what I was seeing with my eyes, what attracted me almost subconsciously, was the chaotic energy of the branches—the lines that they created and repeated—to convey an almost rhythmic pattern. And so I took a different visual approach and explored using the branches and the angles they created with the edges of the camera frame to create movement through the image.

And for me that creates the tension between the lines flaring from the bottom corners of the image to the top where they gain more visual weight, and the color gradient getting darker and stronger from top to bottom. Finally, the rocks add some grounding, something out of the reflection that creates perspective, some spacial depth space between the different elements of the image. I tried both vertical and horizontal formats, but as you can see the vertical is much stronger for both the color gradient and nature of the lines.

Another subtle but important aspect to this image is the movement of the water. A perfect reflection would have made the tress too distinctive, and I quite like the slight blur that the water creates, emphasizing the solidity of the rocks. Too much wind and the lines disappear, making the image too ambiguous.

Many subtle design elements go into making strong compositions, not to mention the most important element of all – does the image convey something of what the photographer felt or intended.

And for me the answer is less interesting that the creative approach we take to make images. That is where you learn the most, when you’re reaching for something that is right at the edge of your ability.