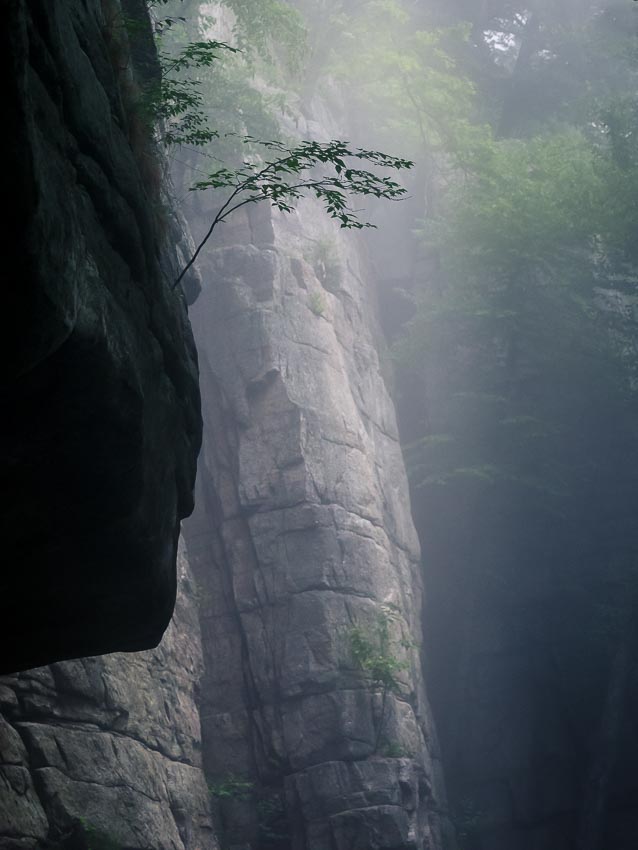 Over the years I’ve come to realize more and more that making an image is as much about what we bring to a moment as it is what the moment has to offer. Nature offers or confers an invitation for visual and emotional engagement, but we must be willing to listen, to receive, to see.

In Big Magic, Elizabeth Gilbert says, “Curiosity is the truth and the way of creative living,” and it’s the curiosity that will never let you down in nature. For me that pretty much describes how I made this image. It’s the constant curiosity I have in how light interacts with shapes, colors, forms, and our visual sense of the world. But mostly it’s how that makes me feel.

It had rained all night and the forecast called for more light rain, so I wasn’t sure what to expect at the Mohonk Preserve near my home. I decided to go anyway because I’d rather spend time in nature under almost any condition versus staying at home or visiting my local cafe (as much as I enjoy that.) Mohonk is also near and dear to my heart. It was and continues to be my training ground so to speak, a place I know intimately yet never tire of visiting.

It was wet and foggy when I arrived but the forest had a wonderful feel that can best be described as serene and unmistakable. It’s a place I know well, both emotionally and physically. This is why you’re here, I thought as I walked on the trail, trying not to hope for anything but rather to give my fullest attention.

That’s not an easy thing to do, and too often I have found myself wanting something more: better light, more clouds…less this, more that. But none of that “mental baggage” makes any difference does it. In fact it makes matters worse, because the attention, the curiosity, is diminished, or even gone completely.

How do I know this? Because it’s happened to me many, many times. And guess what, it’s never resulted in a better picture. It’s only when I remain aware and curious that I might have the chance to see more deeply; to remain engaged.

After about 2 hours of wandering and capturing a few images here and there, I decided to head home, happy about the time I had spent amongst friends (trees) and wondering when I would return. Just then the fog started to lift just a bit and very subtle light started to penetrate the forest floor.

As the fog lifted, I followed the light as it became warmer higher in the forest canopy, and I saw this particular scene. My initial and sole attraction was the lone tree projecting out from the rock wall. Why this tree? Because its gesture, (an term I learned from Jay Maisel), was accentuated by its silhouette and the bright warmish light behind it. It also lacks color whereas the area surrounding it contains the only green in the composition, adding emphasis to its meaning.

I wanted to make the image simply about that little tree, but it’s the scale I also wanted to capture because that really adds a sense of depth and drama. A relatively narrow focal length was needed to isolate that area since I was standing at least 50-60 feet away from the tree and rocks. I initially started with a horizontal orientation, but I quickly switched to a vertical format to take advantage of the lines and major shapes, which are all moving vertically.

It wasn’t until I started to “frame” the composition that I noticed the pattern of the large “masses,” from very dark, to light, and back to darkness. And because the strong lines lead without any ambiguity, I “pushed” that very dark area on the left more and more into the composition in an effort to make the transition that much more dramatic. As long as I could maintain a general diagonal design, and the light remained warm and beautiful, the shadows would help make the image that much more powerful.

In my recent talk at B&H, I explain the three core elements of composition: leading lines, center of interest, and unity. When I bring the viewfinder to my eye, these are the things I’m looking for simultaneously, and they directly affect how I move the elements around in the scene.

I made a few exposures careful not to clip the highlights because I needed the detail on the rocks. Camera settings on my Olympus E-M1 were:  f/4 @ 1/125, 60mm (40-150mm lens), ISO 400, no filters. And of course as always happens, things never remain the same, and the light moved on.

I’m often asked how to capture fog, and the answer is I don’t capture fog. I try to capture light because that’s the thing that provides the energy for an image. The fog certainly adds a special element to the light, but nonetheless it’s the light that I look for. Fog affects contrast, color, detail, and of course light. And all of these influence the mood of an image, which ideally is simply a reflection of the photographers emotional experience at the moment the shutter button was pressed.

So instead of photographing fog, try to look for variation and interesting light. It’s how fog affects a scene that’s interesting, not the fog itself.

During a recent printing workshop where I had the print displayed, I was asked to talk about this image, and I found myself at a loss of words. That’s ironic given how much I’ve written here, but I suppose it was similar to being asked to describe my feelings at that moment. nI simply said I was reacting to my curiosity, to my gratitude, and to my need for moments such as these.

I often talk about how an image can suggest a feel, a mood, an ambiance. And that’s what I want to convey with this image, so developing the image and selecting a paper is about maintaining those impressions as faithfully as possible. The shadows aren’t important with respect to detail, they add drama and support the light, so a mat paper is ideal from that standpoint alone. 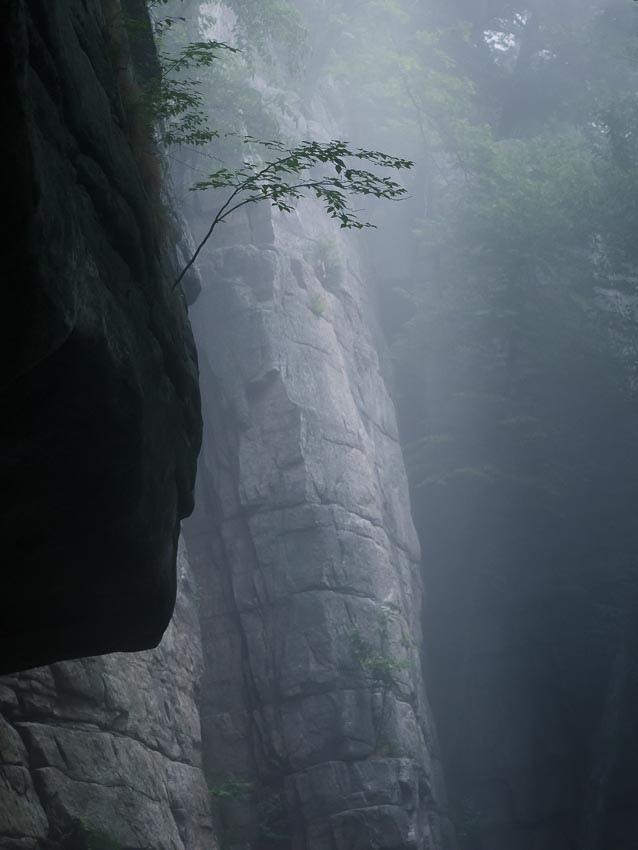 In addition, the light needs to be communicated as softly and as nuanced as possible, yet retain the contrast in the lone tree with it’s suggestive shape and motion. A random but subtle texture would also add interest to the dark areas in all four corners, as well as add some dimension to the center rock.

A paper that’s up to that challenge is Canson Infinity’s PrintMaking Rag, and it works great for this image. This print is 13” x 19” wth a 1.5” border on the left and right side. It really captures what I remember about the moment, in a way that is both clear yet subtle. I want to invite curiosity in a print, and I think the paper leaves room for that tonally without compromising the very important details in the highlights. 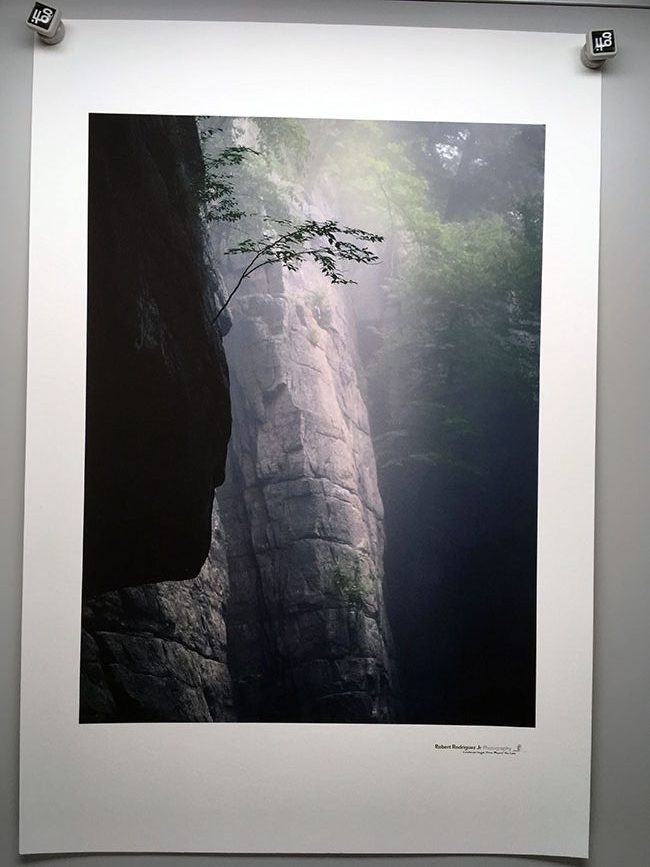 I’d love to hear your feedback, so feel free to contribute below. Thanks as always for your attention.